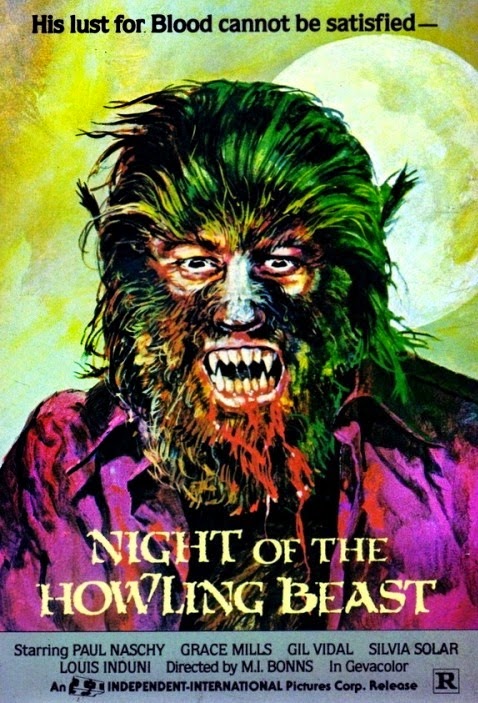 
If you can pass up a film titled The Werewolf and the Yeti then you are a stronger man than I. An expedition in the Himalayas disappears, leaving behind a camera with photos of a Yeti (aka Abominable Snowman) on it. Despite tragedy befalling the other group, Professor Lacombe (Josep Castillo Escalona) decides to organize a follow-up expedition because he wants to locate the famed elusive beast and make "the most important anthropological discovery of the century." Also coming along for the trip are his daughter Sylvia (Grace Mills), anthropologist and psychologist Waldemar Daninsky (Paul Naschy - who also scripted under his real name Jacinto Molina), Larry Talbot (Gil Vidal), Melody (Verónica Miriel), Norman (Juan Velilla), Ralph (Ventura Oller) and some locals. Once in Tibet, Waldemar hires guide Joel (Victor Irsael), who knows his way through the mountains, to get a head start on his colleagues. They become lost in the snowy mountains, Joel disappears and Waldemar takes refuge in a large cave. Inside are two barely-dressed women who (awkward threesome alert) seduce him and then reveal themselves to be cannibal vampire witches. Waldemar manages to kill them both, but not before being bit by one of them. He wanders outside where there's a full moon, falls to the ground and time lapses into a hairy werewolf with pearly white fangs. Not sure how vampires can turn someone into a werewolf, but I guess there's no point in over-analyzing.

Back at the home camp, the Professor and company decide to go looking for Waldemar. Would-be rapist Norman has his throat ripped out that night right after trying to assault Sylvia. The next day everyone is ambushed by bandits working for Sekkar (not Chaka) Khan, who manage to gun down Larry, Ralph and nearly everyone else except for the Professor and Melody, who they kidnap, and Sylvia, who manages to run off into the woods. Poor Sylvia is almost raped a second time by some other bandits, but Waldemar comes to the rescue and kills them. He and Sylvia then stumble upon a monk who knows how to cure the curse placed upon Waldemar by mixing a magical plant with the "blood of a young woman." Before they can get that far, they're tracked down by Sekkar (Luis Induni) and his henchmen and brought back to a temple. Said temple comes complete with a large torture chamber, cells where victims are chained to the wall and a pit of spikes. Also there is an evil witch named Wandesa (Silvia Solar), who is trying to cure Sekkar's skin affliction by giving him skin grafts from unwilling donors.

It's all a perfectly fine juvenile horror / adventure with some scenic outdoor locations, good sets, a fast pace and decent cinematography by by Tomàs Pladevall, complete with colorfully lit (purple, red, blue, orange) interiors. Unfortunately the film has yet to be remastered for an English-language release, so the DVD's available are simply taken directly from VHS masters and are a bit worn and too dark. However, there's certainly still enough blood, action, nudity and various crazy hi-jinks to make this worth watching. Both the Werewolf and the Yeti and Night of the Howling Beast versions are mostly complete, though the print titled Hall of the Mountain King (what the hell is that even supposed to mean?) reportedly has as much as seven minutes (mostly sex and violence, of course!) removed.

And before I sign off, I must express some slight disappointment in the Yeti aspect of this film. The Yeti only appears at the very beginning and very end and probably has about 3 minutes of total screen time. The werewolf and yeti do indeed meet and do get into a fight, but those scenes are brief and it's not even the best part of the movie, though it certainly should have been.