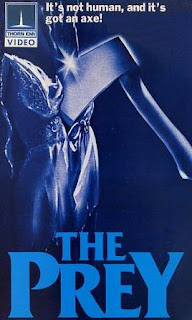 Directed by:
Edwin Scott Brown
Six teen campers (including former Playgirl centerfold Steve Bond and BLOODY BIRTHDAY star Lori Lethin) are stalked and killed by a deformed psycho. People are offed off in various ways, like sleeping bag strangulation, decapitation, ripped-out throat and falling off a mountain. In between we get enough nature and wildlife footage to put a National Geographic special to shame. It's fairly well photographed (especially shots of the Colorado Rockies) but that doesn't do much other than to help pad out a film that would otherwise be way too short for feature-length status. There's absolutely nothing here to help elevate this above the norm. In fact, calling this the "norm," as in average, is being far too kind. It sucks. Interesting though to find big guy Carel Struycken (Lurch from the 1990s THE ADDAMS FAMILY movie series) and Jackie Coogan (Uncle Fester from the original 1960s The Addams Family TV show) in the same movie. The make-up fx are passable, but nothing special. The director is best known for his adult movies (he made the hit IRRESISTIBLE starring Marilyn Chambers). Not released until 1984.
★
Posted by The Bloody Pit of Horror at 9:06 PM