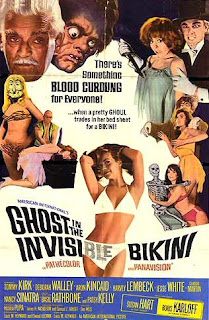 Originally conceived as another Frankie Avalon/Annette Funicello romp (both of whom would later drop out of this project, along with The Supremes), this was both the last Beach Party movie and the only Beach Party movie not set on a beach. The only reason I was even remotely interested in watching this one was for the "guest appearances" from Boris Karloff and Basil Rathbone. Karloff plays Hiram Stokely, a "corpse" who is awaken in his coffin by "ghost" Cecily (Susan Hart), his former girlfriend who died at a young age while he aged. She informs him that he has just 24 hours to do a good deed so he can spend eternity in heaven with her. As an added bonus, if Hiram is successful then he'll regain his youth. And even better, since Hiram cannot leave his crypt, Cecily will actually do the leg work for him as they communicate through a crystal ball. Hiram decides the good deed should involve making sure the heirs to his estate - Chuck (Tommy Kirk), Lili (Deborah Walley) and Myrtle (Patsy Kelly) - actually receive their inheritance. The problem lies with his crooked attorney Reginald Ripper (Basil Rathbone) and his "sinister sidekick" J. Sinister Hulk (Jesse White), who conspire to swindle the million dollar estate away from its rightful owners.
The three heirs show up at Hiram's mansion, along with the attorney, and must remain there until midnight for the reading of the will. Myrtle's nephew Bobby (Aron Kincaid) and about a hundred brainless, grinning teens pop by in a bus and head straight for the pool. A band starts playing, Nancy Sinatra starts singing "Geronimo" and suddenly we're suddenly in musical hell as a bunch of rhythm-deficient young folks in bathing suits start bouncing around. Throw in more supporting characters (Quinn O'Hara as Rathbone's daughter, Francis X. Bushman as the groundskeeper, Benny Rubin as an embarrassing chicken truck driver, Harvey Lembeck as a biker, etc.) then was needed, pile on lame "comic" gags and sound effects and pad things out with around a half-dozen lame and (mostly) badly-performed musical numbers and you've basically got this labored and unfunny would-be dark house comedy from AIP. It's always nice to see Karloff and Rathbone - even in something like this - but most of the rest of the cast either annoyingly overacts or mugs, are talent and charisma free (I'm looking at you, Kirk and Walley) or look as if they'd rather be off doing something else. I've not seen many other "Beach Party" films before this one but they were basically little more than thin excuses for mainstream audiences back in the day to watch barely clad teens wiggling around in bathing suits and that's about it.
The opening sequence is wonderfully atmospheric, with lots of fog and a red-cloaked figure walking through a graveyard toward a crypt, but that just goes to show what a waste this really is. The film seems to have had something of a budget. It's colorful, has a big cast, the shooting locations are nice and the cinematography by Stanley Cortez is excellent. Some reviewers might find this campy and enjoyably dated, but sorry to say, I didn't care much for it.
★1/2
Posted by The Bloody Pit of Horror at 6:51 PM