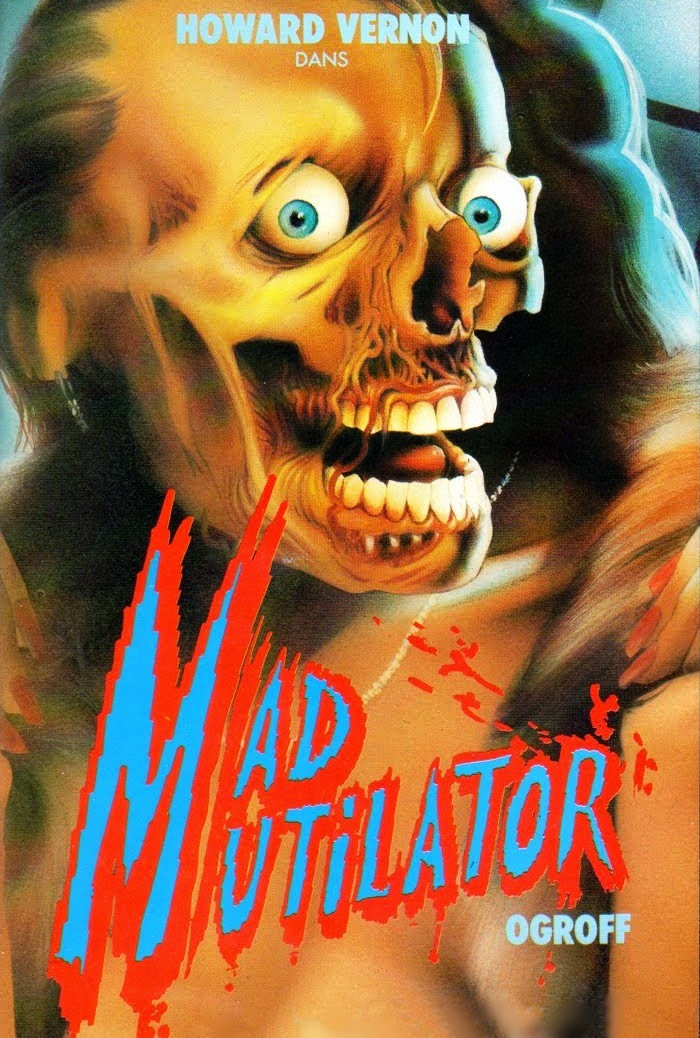 
If you're a fan of the horrid 1980 American slasher DON'T GO IN THE WOODS (yes that film does have fans) you might get a kick out of this completely awful French Texas Chainsaw Massacre wanna-be, which is so inept it almost makes DON'T look like a masterpiece by comparison. OGROFF was filmed so cheaply they couldn't even afford sound, so it was all dubbed in later. There's hardly any dialogue, but what they did add is terribly recorded and edited in. People slam car doors, shoot guns and move their lips and nothing is heard. The almost non-stop synthesizer soundtrack even drops out every time a noise is added! Music plays. Music suddenly stops. Scream is inserted. Music starts up again. Music stops. Sound of bird chirping is inserted. Almost the entire movie is like this! Not only is the sound quality abysmal, but every aspect of this film is home movie quality, from scenes going from day to night back to day again, underlit night scenes, overlit day scenes, no scene continuity whatsoever, people who barely react to getting attacked, gratutious cheap/cheesy gore effects, etc. It doesn't make a lick of sense and is basically little more than 90 minutes of bad actors getting chased through the woods and killed. I'm not even sure what Ogroff means. Maybe it means insanely awful. I actually had to look it up. Apparently it's the name of the killer even though I don't remember the name being uttered a single time here.

A couple pull their car over to the side of the road so dad can take a leak. Mom steps outside for a smoke. Their little boy (who looks about eight years old and is decked out in a hot pink outfit!!) runs off into the woods with the dog. A psycho dressed in boots, a toboggan, a fluffy sweater vest and a brown leather mask with some metal studs on it pops out from behind a tree and axes the kid. Then he chops off the dad's head. Mom runs away through the woods, is ignored by a passing car and is then tricked into the clutches of the killer. Well actually, after being chased around in the middle of nowhere she sees the killer walking away from her and basically just runs right up to him! He tries to tie her up. She escapes again, and makes it back to a shack in the woods. Uh oh. It's the killer's home! He gets her again, ties her to a cross with three skulls on it, dismembers her son with a hacksaw right in front of her, takes a bite of the flesh, then cuts out her tongue and feeds it to his dog. Meanwhile, a young woman finds the families abandoned car and goes to the cops. At least, I think she goes to the cops. She actually just walks up a sidewalk, they show a shot of a building reading "Gendarmerie Nationale" and then she's shown walking back toward her car. That same lady goes back to the spot of the abandoned car by herself and then starts walking through the woods for no apparent reason. She finds a dead man hanging from a tree, cuts him down and then realizes the man in actually a zombie (?!) She ties the noose to her bumper and rips its head off. OooooooK...


Just like in the aforementioned DON'T GO IN THE WOODS, random people seem to be doing completely random things in the middle of the woods. Two men sit outside playing chess. One gets axed in the face. The other gets his leg cut off. Their female friend tries to hide in the car but she gets her hand smashed in the door, which is then whacked off with a sledgehammer. The killer goes back home and chops up the tied-up mom with an axe, making her arm fall off. Then he decides to sink the woman's car. We see him pushing the car and suddenly a Matchbox car is seen falling into a puddle. Another woman pulls her car off to the side of the road and goes to open her trunk. The killer suddenly pops out (?!) and axes her. He sticks a knife all the way through a woman kneeling down picking flowers and then licks the knife. He also gets into a hatchet vs. chainsaw duel with a guy, takes the chainsaw from him, cuts off his legs and then guts him. They throw a lot of blood around in this one, but it's cheap, badly done and never convincing.


Anyway, the woman who found the car eventually shows up again. The killer kidnaps her, takes her back home and ties her to a chair. He realizes she looks like a woman in a picture frame I'm assuming is his mother. Then the girl has under-the-covers sex with the psycho and, get this, moves in with him! She even starts cleaning up all the scattered body parts lying around in the front yard. So it's an hour into this mess and it seems like your garden variety talent-free home video, before suddenly pulling the 'we know this is lame so we'll try to be irreverent and campy so people will think our crappy rip-off is a cult movie' routine during the final 20 minutes. Zombie start popping up everywhere, the killer starts riding around on a motorcycle dismembering them and a vampire priest (played by guest star Howard Vernon) shows up at the very end. It's not nearly as good as it may sound. In fact, it's all incredibly boring and annoying. Even a scene of the killer getting pleasure from "stroking" his hatchet is boring and stupid. I kind of liked the music, though. One song sounds like a disco version of the organ tune from Carnival of Souls.


Though never officially released here in the U.S. - We already have plenty of our own cruddy shot-with-a-camcorder "horrors" over here, thank you very much, France! - the film apparently received two VHS releases in Europe. One time it was called Mad Mutilator and the other time it was called Ogroff: The Axe Monster. A DVD-R is also available from Video Screams, and the film can be found on several torrent sites. Still, not many people have shown interest in seeing it (can't say I blame them!) and it only has racked up a measly 8 votes over on IMDb.