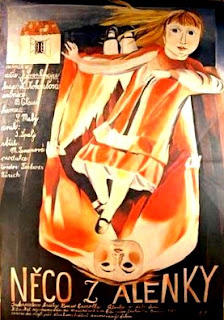 Directed by:
Jan Svankmajer
One of Czech director Svankmajer's most popular films, this blending of live action with stop motion animation is an often imaginative, though drab and dramatically uneven, mixed bag "inspired by" (and containing many of the famous/important characters from) the Lewis Carroll children's classic. Wide-eyed Alice (Kristýna Kohoutová) is having a boring day. That is, until she catches sight of the White Rabbit. He's clumsy, noisy and has a little problem with his stuffing coming out of a hole in his belly that he tries to make up for with a steady diet of sawdust. Instead of a rabbit hole, we get a small dresser with a single drawer, as Alice follows the rabbit down into a drab, dirty, mean-spirited netherworld that isn't the least bit magical, beautiful or in any way pleasant. Instead, we get a grungy, claustrophobic world full of hideous, cruel creatures, grime-stained walls and muted, earthy color scheme.
.
Alice floods a room with her own tears, shrinks (well actually turns into a doll) when she drinks a potion and grows when she eats a tart. The White Rabbit turns out to be one mean bastard who, over the course of the film, smacks Alice's hands with a paddle, pummels her with rocks, dishes and pots, heads after her with a pair of scissors and an axe (!) and organizes a posse of skeletal critters (who arrive via a coach being driven by a skeletal jester) to hunt her down. The March Hare is wound up and butters stop watches. The Mad Hatter is controlled by puppet strings and demands "I want a clean cup!" about a dozen times. The Caterpillar is a worm-like sock that crawls through holes it bores into the floor. Animated cards have a sword fight and the Queen of Hearts (also a card) eventually arrives demanding her head.
.
Other odd things occur, the best of which is a bit where a mouse dressed in a sailor suit climbs onto Alice's head, sets up a kettle and begins making soup using her hair to start a fire. A loaf of bread grows nails, eggs hatch skulls, roaches emerge from a tin can, fish-faced guys in powdered wigs deliver an invitation and a piglet cries like a human baby. During the climactic game of croquet, the balls are pin cushions that transform into hedgehogs and the mallets are flamingos that transform into chickens. There's certainly no shortage of imagination here and the crude animation itself is both wonderfully done and wonderfully evocative of what one would envision being a child's nightmare world. The setpieces themselves specifically use props that directly relate to a young girl's life (the dollhouse, the tea set...). Still, there's something a little off about this entire production that keeps it from hitting a bullseye.
.
Could it be the repetitive and utterly pointless close-up shots of Alice's mouth repeating things we've just seen seconds earlier? 100 or so asides ("Sighed the white rabbit." "Thought Alice to herself." "Called the animals." "Screamed the queen." etc. etc.) following nearly every line of dialogue not only constantly remove us from the action but also lessen the intensity. The sound design (glass shattering, metal clanging, babies crying...) is also loud and borderline obnoxious throughout. Now that's I'm thinking about it, perhaps the movie might even be better viewed on mute? The animation and visuals themselves certainly are enough to hold one's attention. The motivation behind why an 'art director' would want to strip the merriment and clever wordplay away from the source material in favor of the ugly and banal (which is about the opposite of what many films based on classic fairy tales have done) doesn't really require comment.
.
★★1/2
Posted by The Bloody Pit of Horror at 6:36 PM