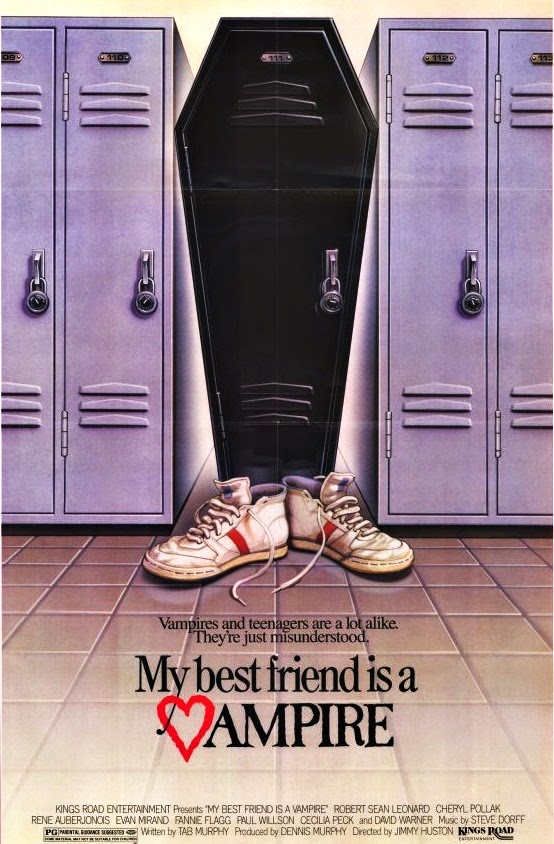 
Seldom talked about by horror fans and horror historians (and rightfully so), this belongs in the company of Teen Wolf, Teen Witch, My Mom's a Werewolf, The Invisible Kid (I can't go on!) and others as the late 80s reemergence of tame horror comedies marketed toward a teen audience. Hey, it happened once before in the late 1950s, spearheaded by the success of I WAS A TEENAGE WEREWOLF, and since Ronald Reagan was in office and this country was starting to regress back to "decent morals" and "family values" territory once again, it only seems fitting. While this isn't much, it's easily one of the best of the bunch thanks to an amiable lead performance from likable Robert Sean Leonard (one year before getting some critical attention for the syrupy melodrama Dead Poet's Society) and some amusing mugging from a solid supporting cast (Rene Auberjonois, David Warner and Paul Willson are especially funny). If being a teenager wasn't hard enough, young Jeremy Capello (Leonard) also has to cope with his newly acquired vampire traits after being bit by a sexy bloodsucker (played by Cecilia Peck, the daughter of Gregory). It's all harmless, silly comedy for the kiddies who should probably be watching stuff like this instead of movies like Friday the 13th. I didn't, and look how I turned out.

NIGHT OF THE DEMONS fans keep your eyes peeled for Mimi (now Amelia) Kinkade, who can be spotted in a bar.

> belongs in the company of ... The Invisible Kid

uhhh... i think i actually liked that once upon a time, although in my defense i would have been of a similar age to the teen characters.

gave VAMPIRE a shot for the decent cast. the lead, robert sean leonard (who i must have seen in MANHATTAN PROJECT), was also good. appreciated the parents not freaking out about their son possibly being gay. correctly predicted usage of timbuk 3's "future's so bright..."