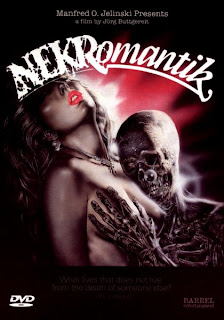 
Even though there are hundreds of more graphic movies on the market, Nekromantik is still going to be very strong stuff to the majority of casual horror fans. The big difference between this one and the others is its availability. While most 'extreme' titles will forever remain in obscurity, only to be traded around between sick-movie devotees on dupe tapes and bootleg DVD-R's, this one has actually had several official releases on video and DVD. This not only makes it one of the sickest genre films widely available, but also ensures it a strong cult following and a reputation as one of the ultimate gross-out films. There's no doubting that by conventional standards this is about as repulsive and perverse as it gets. There's ample reason to condemn this film, yet at the same there's reason to defend it because it's effective, visually interesting and achieves exactly what it sets out to achieve. My mixed feelings aside, I'm giving it a positive score because on its own sick terms its a success. Rob (Daktari Lorenz) works days cleaning dead bodies up from fatal car crashes on the Autobahn, develops a sick fascination with death and collects body parts and internal organs which he stores in mason jars back at his cramped apartment. In order to spice up a rocky relationship with his equally disturbed necro girlfriend (Beatrice M), he brings home a rotten corpse for a ménage-a-trois, which backfires when she decides she prefers the, uh, stiff to him!

The grainy, low-budget photography adds to the oppressive, suffocating atmosphere and there is certainly enough depravity to go around, including one of the most twisted and memorable endings in horror history. Plus, a real rabbit is killed and skinned, a cat is fake killed (at least I hope it's fake), there are some mildly interesting arty indulgences and loads of full (often unappealing) nudity from both sexes. Film Threat was the first to release a subtitled and unrated (would certainly be X) version here in America and also handled distribution of the 1991 sequel; with both titles eventually being distributed on DVD by Barrel Entertainment. A documentary about this film's production called Corpse Fucking Art was also released.