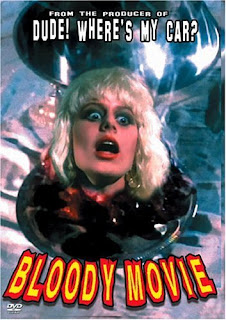 Directed by:
André de Toth
Nick Marino
1920s film star Lance Hayward is missing to the world at large, but people begin mysteriously dying around his abandoned estate. Three teen couples (including a woman who is a huge fan of the presumably deceased actor) end up going there on an otherwise boring weekend and rummaging through the place. They find old movie props, a locked vault, nitrate movie cans (that come in handy during the fiery finale) and some other interesting things until they start disappearing one by one. There are also a few barely-seen Zoot Suit-wearing phantoms who lurk around the woods and use two cars to pull a guy in half.
.
Director Nick Marino's contribution to the 80s slasher cycle does not fully overcome the familiarity of the premise, but stylistically he is trying something a little bit different, beginning with mock silent screen credits and a great song by Ian Whitcomb which is also an effective evocation of the Golden Age of Hollywood. Before each murder, we get a flurry of movie clips from anonymous films and comic-book like shots of movie stills and lobby cards, all edited with quick precision and all tinted monochrome, so it doesn't look as sloppy as it otherwise would have. The clips may also explain why this film did not find a wide release until about fifteen years after it was made (the filmmaker may have come across some copyright problems when using this footage). The special effects are certainly bloody enough and there are a variety of murders here. A man is pulled apart by two cars, a hand is chopped off, someone is impaled on a picket fence and there's a pretty good decapitation (followed by a bloody head on a platter gag). Other deaths involve everything from a bow and arrow to fencing sword. The sets are minimal, but effective.
.
However, the screenplay could have definitely used another polish; the stereotyped characters are thrown into the mix with a killer who is not only wholesale boogie-man material but whose motivations and reason for existing are so hopelessly muddled that you never know for sure just what he is or why he is doing what he's doing. The clarity is almost non-existent, but I supposed the man is a ghost since he pops up all over the place and appears in both youthful and elderly forms. But, hell, by the time it's all over with, you can't totally hate this one. After all, somehow it ends up letting the cultured heavy and lone female survivor do some passionate Shakespearian stage work somewhere in limbo!

As with most 80s slasher films, the performances are highly variable. The veterans in the cast all have about one scene each and get through BLOODY MOVIE with a bare minimum of embarrassment. Aldo Ray is a wino who gets a hook in the head, Dan Haggerty is impaled, Cameron Mitchell is a detective who is strangled and hung and Alan Hale, Jr. (The Skipper from Gilligan's Island) is a wide-eyed security guard (and the only one without a death scene). John Ireland receives top billing as the killer, but he doesn't even materialize on-screen until the very end (though to his credit, it is still a creepy cameo). Of the younger cast, we have some familiar genre regulars, William Butler (LEATHERFACE, NIGHT OF THE LIVING DEAD remake), Ken Abraham (CREEPOZOIDS), Carla Baron and John Stuart Wildman (both from SORORITY BABES IN THE SLIMEBALL BOWL-O-RAMA), and Denise Stafford (who apparently is a porn actress who goes by the name Jamie Summers). Though leading lady Staci Greason (who played the first victim in FRIDAY THE 13TH, PART VII) is quite good and gives the most professional showing of the younger cast, it is Michelle Bauer who steals this film away from her co-stars with a full blown comedic performance. She carries on quite capably here and nails the most laughs as a drunken punker chick who ends up stumbling her way through the mansion with her annoying biker boyfriend before getting whipped and pushed down a flight of stairs. It's actually one of her very best roles, making this delayed DVD release an important one in keeping her cult legacy alive. I also appreciate the filmmakers for having the common sense to keep her around until near the end. Though I am sad to report that sleaze movie great Jay Richardson, who is in just as many of the schlock horror films as Michelle, is barely visible as one of the forest-lurking phantoms.

Originally titled TERROR NIGHT, this was worked on by a lot of prolific and familiar Z-movie production people. It was co-scripted by Kenneth J. Hall (who also helped cast the film), was co-produced by Nancy Paloian (DUDE, WHERE'S MY CAR?) and shot by Howard Wexler. The special effects are by Cleve Hall (who was also the 2nd unit director, along with porn purveyor Fred J. Lincoln) and John Vulich helped shoot and edit it. Given special thanks in the end credits are André de Toth (who lent directorial assist to Marino), David DeCoteau and Fred Olen Ray.
.
★★1/2
Posted by The Bloody Pit of Horror at 10:11 PM

didn't know jamie summers had legit credits. or that carla baron (most notably frankie in BOWL-O-RAMA) is now in the "psychic detective" racket; seriously could have done without learning that.

Here's something hilarious / interesting: Baron actually changed her name on IMDb to "Carla B." for all of her B-movie credits to separate them from her "psychic detective" credits, which are listed on a separate page under her full name. It's as if she's embarrassed of the horror movie roles when it SHOULD be the other way around! However, she decided to keep her one mainstream gig - as an uncredited stand-in for Kelly Preston on Twins - on her "legit" page. Groan.

> she's embarrassed of the horror movie roles when it SHOULD be the other way around!

Reading over her little case history is mighty depressing! Can't believe there's not some kind of law against running those scams and taking advantage of grieving, desperate families. Furthermore, I can't believe some policemen actually worked with her when she has no record of success whatsoever.

She also made claims Arnold Schwarzenegger harassed and sexually assaulted her when she worked on Twins, then later said she still voted for him. What in the hell is wrong with this woman?