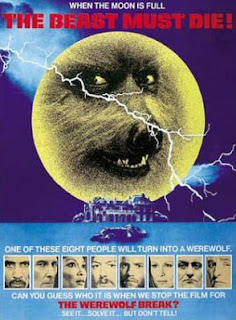 Directed by:
Paul Annett
Invited to a secluded, heavily-guarded mansion under false pretenses by big game hunter Tom Newcliffe (Calvin Lockhart), a group of people are soon told by their host that he believes one of them to be a werewolf. This fairly popular British effort, while passable, could have been a lot better (at least in my opinion). I'm sure the premise seemed more high tech when first released, with some mild James Bond-like touches (video surveillance, automatic weapons, etc.), and elements of blaxploitation, Agatha Christie and monster movie woven into the storyline, but I don't think it was brought together all that well. I didn't really like the presentation of the "werewolf" (which is simply a big dog or a wolf), the cinematography was usually flat, murky and/or too dark and, as much as I like many in the cast, most were wasted and the dubbing was really distracting. Peter Cushing's accent seemed to come and go and bits of his dialogue appear to have been added later by someone else and sounds like a completely different person. No clue why they redubbed Marlene Clark either, as she's a fine actress in the other films I've seen her in. In addition, it was frustrating seeing Charles Gray (a suspect) and Anton Diffring (a surveillance expert) wasted playing colorless supporting roles, though the scene where the latter is killed was probably the highlight of the film for me.
.
The "werewolf break" (narrated by Valentine Dyall) is kind of amusing, though in my opinion the film flat out fails as a mystery in the same exact way many other genre films fail as mysteries - it doesn't adequately flesh out its characters after cursory introductions, nor does it offer up any real clues to aid viewers in uncovering the killer. The identity is the kind of pull-it-out-a-hat crap shoot that annoys me, minus any kind of exposition or insight to tie it all together or make the big reveal satisfying. In other words, instead of giving us 30 seconds to think about what we've seen, only about 2 seconds are needed because one guess is as good as another. That said, there was one decent twist that did catch me a little by surprise, so I'll give it credit for at least providing that.