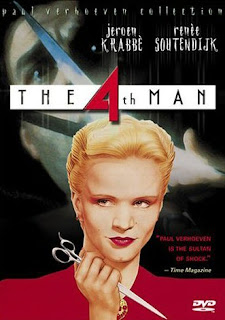 ...aka: 4th Man, The
...aka: Fourth Man, The
Directed by:
Paul Verhoeven
I don't know if I'd consider this a masterpiece of not, but it's extremely well made, artistic, suspenseful, intricately plotted, thematically all over the place and full of bleak foreshadowing and sexual-religious imagery. There's also some great camera-work from Jan de Bont, an atmospheric score from Loek Dikker and outstanding acting from Jeroen Krabbé and Renée Soutendijk, the latter giving one of the most sneaky, subtle 'femme fatale' performance I've ever seen. Like many other European movies, this movie has an unashamed, non-judgmental attitude toward sex, nudity and the complexities of sexuality and has zero reservations about mixing it all up with religious and/or surrealistic (some would say blasphemous) images. In other words, if you can't bear the thought of seeing a lust-driven homosexual envisioning the object of his carnal desire as Jesus crucified on the cross before the two of them go at it inside a cemetery crypt then this might not be the movie for you. What surprised me more is how this bizarre movie managed to completely dodge being a pretentious mess. It mixes the abstract/surreal/parallel fantasy-reality scenes and somehow makes it all work. Like any good mystery, you can see the pieces slowly falling into place as the movie progresses. There is NOT an out-of-left-field resolution here. The movie has direction, there's no needless filler and once it concludes, you begin to understand the purpose of what may have confused you earlier. If you like the work of Ken Russell and David Lynch, I can almost guarantee you will love this movie. Hell, if you have no idea who they even are, you still might like it.
.
I'm not going to spoil the plot by getting too detailed here, but the film's opening shot - through a web as a spider catches its prey - sets the stage as Krabbé, as unshaven, smug, bisexual writer Gerard Reve (interestingly, also the name of the writer whose novel this is based on) crosses paths with a wealthy, mysterious, sexy woman named Christine (Soutendijk, melding androgynous stylings with Simone Simon-like innocence/cuteness that's pretty unnerving), who may be a literal 'black widow' responsible for the deaths of her three previous husbands. The two become lovers and move in with one another, but we're led to believe (through Christine's bizarre behavior and the frequent appearances of another woman - played by Geert de Jong - who may or may not actually exist) something terrible is boiling under the surface. When another of Christine's lovers, the young and "beautiful" Herman (Thom Hoffman), shows up at the house, things take an unexpected turn. And that's all you need to know.
.
THE 4TH MAN was a huge art-house success in much of the world, but didn't make it over to the US until 1983, where it was awarded the Best Foreign Film of the year from the Los Angeles Film Critics Association.
.
Ironically, Verhoeven himself has said in interviews that he deliberately wanted to craft an "art house"-style film - at least partially as a joke - to counter the frequently criticism he'd received for being an artless director who wallowed around in "working class realism." Regardless of his original intention, this film is so well-made and intriguing that Verhoeven managed to both one-up his detractors and please audiences at the same time. As a result, he was soon offered a studio contract in Hollywood, where he'd churn out a few great films (FLESH & BLOOD, ROBOCOP) and a few lousy ones (SHOWGIRLS). In fact, Verhoeven's biggest hit, BASIC INSTINCT (1992), is almost like a less interesting, junior league version of this one. Soutendjik also tried her hand at acting in America, and since GRAVE SECRETS (1989) and EVE OF DESTRUCTION (1991) were the best offers she was getting, she headed right back home to the Netherlands.
.
A word of warning, though... If you happen to stumble upon an old VHS copy of this film (the one distributed by Media), keep on walking. Their version is virtually ruined by awful dubbing. Instead, head straight for the subtitled Anchor Bay DVD release, which is a subtitled and excellent quality print.
★★★1/2
Posted by The Bloody Pit of Horror at 12:12 AM