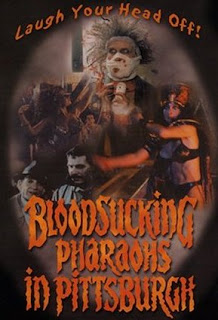 ...aka: Picking Up the Pieces

Directed by:
Dean Tschetter
Uneven, but sometimes highly amusing horror comedy which has a few things in common with the slightly better known cult flick HOLLYWOOD CHAINSAW HOOKERS (1987). Like many others of its type, the jokes either hit or they don't, but at least there are a few really good ones, the tone is consistently quirky and it really hits its stride during the last 30 minutes or so, which are genuinely fun and fast-paced. There's also plenty of the red stuff for gore hounds, courtesy of Tom Savini. Someone in a fez is going around Pittsburgh killing innocent women (mostly hookers). Two detectives; hard-nosed vet Sweeney Birdwell (Jake Dengel) and his weak-stomached partner Joe Blocker (Joe Sharkey), who strangely knows all of the victims from his days in Las Vegas, are on the case. They're joined by the daughter of a missing policeman (Susann Fletcher) who shows up in town and finally brings some competence to the investigation. The first victim has her brains scooped out of her head, and there's also death by industrial strength vacuum cleaner, industrial strength trash compactor, jackhammer and parking meter. A funny subplot involves Sweeney's obnoxious chain-smoking wife Erma (producer Beverly Penberthy), who uses one of those electronic voice box things to talk and is jealous of every woman in the same room as her husband. In one scene she tries to kick her smoking addiction by going to a clinic where she's forced to watch scare videos, is punched in the face and then shocked with electric cattle prods. Most of the cast is good, but former adult film actress Veronica Hart (Jane Hamilton) gives the standout performance as a timid roller-skating waitress with a couple of dark secrets. Some Pittsburgh area zombie film alumni - Pat Logan (the NIGHT OF THE LIVING DEAD remake), Don Brockett and Debra Gordon (both of whom played zombies in DAY OF THE DEAD) and Taso N. Stavrakis (an fx man and stunt performer who played a motorcyle raider in DAWN OF THE DEAD) - round out the cast.

The Collector's Edition DVD from Lucky 13 (which is a decent print of the film) has a loads of extras, including deleted scenes, interviews with producer Penberthy and writer-director Dean Tschetter (who used the alias Alan Smithee on some of the prints), behind the scenes footage, press kit pictures, publicity stills, storyboards, the script and a whole bunch more stuff you pull up by popping the disc in your computer.
★★1/2
Posted by The Bloody Pit of Horror at 10:12 PM