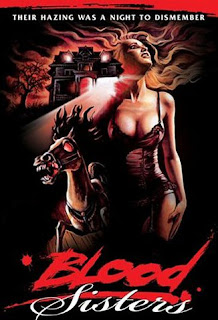 Directed by:
Roberta Findlay
Possessed nightgown! Strangulation by garter belt! Lesbian hooker ghosts! While these things may seem like fun new additions to the slasher movie subgenre, this film flat-out fails to deliver on all counts. It begins with a psycho kid blasting a fat hooker and her trick with a rifle at a whorehouse, before cutting to modern times (13 years later) at the Kappa Gamma Tao sorority house. After wasting time at a bar and with a sex scene, sister Linda (Amy Brentano, who some claim is actually adult film actress Kari Foxx under another name) takes seven pledges (including redhead Shannon McMahon, star of another awful collegiate horror called PLEDGE NIGHT) to the now abandoned brothel for an initiation scavenger hunt. The house has been booby trapped by fun-loving frat guys (who look like they're pushing 40), but ghosts and a psycho killer show up to do them all in. It just takes forever to get to that point.
.
Director/writer/cinematographer Roberta Findlay, who is probably one of the Top 5 most prolific female directors of all time, handles some of the supernatural scenes reasonably well given the budget (a standout being an interesting ghost/mirror sequence), but with its low-grade cast of unknowns, dark/dreary atmosphere, lack of on-screen gore, slow-moving script (it takes nearly an hour before the first sorority sister is killed!) and derivative plotline, BLOOD SISTERS isn't very much fun to watch. And I still have no idea why the house is full of ghosts of the people who used to work there (even the younger prostitutes) since only two murders were actually committed. One semi-decent touch is that most of the girls are given slight personality quirks. There's apprehensive girl, sarcastic girl, fitness girl, nerdy/whiny girl, frumpy girl, snobby girl and slutty girl. Guys wanting to see sexy babes cavorting around in little clothing might be somewhat disappointed that most of the ladies keep their clothes on, though there's a couple of topless scenes and a very awkward lesbian scene.

Small roles are also played by John Fasano (the director of ROCK N' ROLL NIGHTMARE and BLACK ROSES), Pam La Testa (who was in Findlay's THE ORACLE) and late 80s/early 90s Scream Queen Ruth Collins. What ever happened to Ruth, anyway?
★1/2
Posted by The Bloody Pit of Horror at 10:13 PM