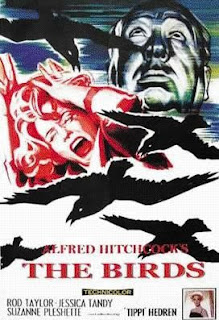 ...aka: Alfred Hitchcock's The Birds

Hitchcock obliterates man's belief of superiority on this planet in the man vs. nature classic; one of his most violent and enigmatic features. Tippi Hedren stars as Melanie Daniels, a free spirit who arrives in the quaint seaside town of Bodega Bay just in time for birds of all varieties to start randomly attacking those in the town. Groundbreaking shots, suspense and shocks based on Daphne Du Maurier's short story, scripted by Evan Hunter (who's also known as novelist Ed McBain). A worthless 1994 "sequel" (with a cameo from Hedren) followed over two decades later. Full review coming soon.