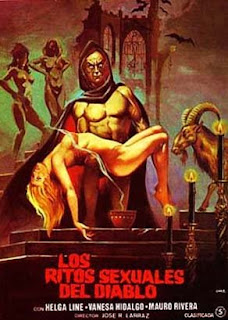 Ultra trashy Spanish horror/ sex/ Satanism flick from the director of the cult erotic hit VAMPYRES (1974). Someone uses voodoo to kill a man during sex. Soon after, the dead man's sister Carol ("Vanesa Ashley"/Vanessa Hildago) and her professor husband Robert ("Martin Ren"/Mauro Ribera) arrive in England for a brief vacation and decide to stay with her eccentric, elegant sister-in-law Fiona ("Martha Belton"/ Helga Liné). Fiona takes them back to her large country estate, the same place Carol grew up, and immediately things start getting too weird for comfort. Fiona makes no attempt to hide her interest in the black arts, with a collection of framed demonic lithos and her use of black candles. She also uses a peephole to spy on her guests having sex, which is just the second of the many sex scenes (there are at least ten in this movie). The third comes immediately after during a nightmare sequence where Carol dreams she's running around in her lingerie being chased by brother Andrew, before the two of them get busy (!) in the same bed he died in. In turns out that Fiona is involved in some kinky Satanic sex cult, which promises Earthly success to its followers, and she wants Robert and Carol to join them. Using some kind of special herbal tea, she's able to neurotic Carol partially sedated, but she's still on edge and apprehensive because of Fiona's strange behavior, her nightmare and the fact she heard her brother's voice telling her to "Leave here forever" while visiting his grave. Robert on the other hand is an easier target and finds himself being seduced by both Fiona and by the cult.

Irritatingly, Carol's dumb ass doesn't leave when she should and is introduced to various coven members who regularly hang out around at the home. These include the intense, bearded "renegade" Reverend Hooper (who sports one claw-like fingernail), his sexy young god daughter Annalise (the girl Andrew was screwing when he died), the bisexual kleptomaniac maid Georgina, stable boy Peter, friendly Dr. Gold (who tries to give Carol tranquilizers at one point), married couple Mr. and Mrs. Consauli and others. I can't give you any of the actors' names who played those parts because the credits have been "Americanized" and are fakes (director/writer Larraz uses the alias "Joseph Braunstein" again). Anyway, Carol sneaks downstairs and catches her hubby in the middle of a full-blown sex orgy involving all of the people listed above. She goes upstairs and goes to sleep, saying nothing. The next day, her husband comes into the bedroom, anally rapes her, then tells her to shut the hell up and then smirks "You're a fucking drag." This barely seems to phase Carol (she's been pretty bitchy since the beginning anyway so...), and she remains in the house. Before long she finds herself being pinned down and initiated into the cult. Serves her right, pretty much. Certain aspects seem to have been influenced by ROSEMARY'S BABY (the tea, the husband being an easily swayed jerkoff, the doctor conspiring along with everyone else, etc.) Notice, I said certain aspects, this does have a few "moments" to distinguish itself...

Like goat sex! Yes, young Annalise and a black horned goat have ritualized (simulated) sex in the barn with everyone watching. There's some icky talk about mixing fluids of "the beast" that they need for their ceremonies to justify it. Georgina the maid (Carmen Carrión) is even show in an earlier scene prepping the goat by massaging its.... Well, no need to get too detailed about it. Speaking of Georgina, her husband John (Alfred Lucchetti) is getting sick of the cult and wants to go to the police. They remedy this by pinning him down and sticking a sword up his ass. And then there's all the sex and all the talk about sex, which is all fairly graphic and raunchy. And that brings me back to Helga Liné. I've always enjoyed her performances from the 60s (NIGHTMARE CASTLE) and 70s (HORROR RISES FROM THE TOMB), and she does a fine job here as well. She's perfect for these roles as classy, almost regal women with a dark side. What is amazing is that she was almost 50 years old when this was filmed, looks fantastic for a woman of her age and is featured in many nude sex scenes. Talk about a gravity defying body. The other women in the cast (all of whom are seen fully nude) seem to vary in age from early 20s to late 40s/early 50s. The guys, well... You can't win 'em all.

So if you want Satanic sex with some sick elements thrown in, you should enjoy this. If you're wanting straight Satanic horror, you may be disappointed. I'm on the fence about it. A bit monotonous at times, but it's attractively photographed, with some nice soft focus work, and the other technical aspects (score, editing) aren't bad. Neither is the acting.