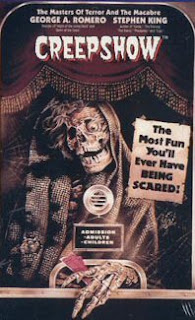 Directed by:
George A. Romero
Director George A. Romero does an excellent job of recapturing the style and feel of classic EC horror comics, using colorful panels, framing effects and comic-like images to bring this popular horror anthology to life. Sadly, he's stuck working with a less imaginative, heavy-handed and sometimes even bland screenplay by Stephen King, who adapted his own short stories. "Father's Day" concerns a vengeful zombie father who rises up from the grave to get revenge on his greedy relatives; one of whom put him out of his misery by bashing him over the head a year earlier. It features Carrie Nye, perfect as an over-the-hill rich bitch, Viveca Lindfors as an eccentric alcoholic, Ed Harris dancing to disco music, John Amplas in corpse make-up, one really good jump scare at the end and some good make-up effects. King himself (in a fitfully irritating performance) is in the second story ("The Lonesome Death of Jordy Verrill"), which involves a brain dead redneck who's taken over by a quickly-spreading green fungus that came from meteor. This segment strives for humor, but it's pretty flat for the most part. "Something to Tide You Over" has millionaire bad guy Leslie Nielsen burying his adulterous wife (DAWN OF THE DEAD's Gaylen Ross) and her younger lover (Ted Danson) up to their necks in sand and watches them on video monitors back at his home. The tide comes in, the two drown and then return as water-logged, seaweed-covered zombies to get revenge. Pretty mediocre.

The last two segments are the best; "The Crate" is set on a college campus where an old crate is discovered under a stairwell. Inside is a hairy, fanged, ape-like creature that starts killing and eating whoever it can get its claws on. The longest segment of the bunch, this works thanks to good effects and monster design, plus strong characterization from Hal Holbrook as a professor driven over the edge by obnoxious, alcoholic wife Adrienne Barbeau, who's very funny as the tart-tongued battle axe who gets just what she deserves (and gets to die several times in amusing "fantasy" sequences). Also with Fritz Weaver and Christine Forrest. Finally in "They're Creeping Up on You," a racist clean freak (E.G. Marshall, doing a good job playing a very nasty and hateful character) is attacked inside his futuristic apartment by a zillion cockroaches. It's very effective if you can't stand roaches (and who can?).

Tom Savini (who also appears in a cameo as a garbageman) did a fantastic job on the effects throughout. Bookmarking all five stories is a silly tale of a little boy whose asshole father (uncredited Tom Atkins) likes to throw away his Creepshow comic books. The kid finally has to order a voodoo doll through one of the ads. It was followed by the mediocre CREEPSHOW 2 (1987) and the much-hated direct-to-video CREEPSHOW III (2004).
★★1/2
Posted by The Bloody Pit of Horror at 1:03 AM