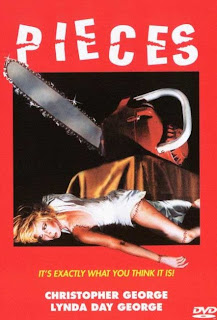 If you're a fan of complete and utter trash with no redeeming social or artistic value, then here's your movie! In Boston in 1942 (where touch-tone phones must have been invented) a little creep is chastised by his mother (May Heatherly) when she catches him putting together a nude jigsaw puzzle. He gets revenge by taking a couple whacks at her head with an axe and dismembering her body with a hacksaw; playing the traumatized little kid act to get away with his crime. Around forty years later, the now-grown kid (who has not only managed to suppress his psychotic urges for the better part of his life but also somehow managed to keep his mom's dress and shoes safely tucked away in a box after all these years still perfectly spattered with bright red blood!) runs around the local college campus chewing up coeds with a chainsaw. One body part from each victim is found missing at the crime scene because the killer is creating his own life-sized human puzzle out of the spare parts. There's a dump truck full of gore as a girl lounging on campus green is decapitated, a topless skinny-dipper is netted in for the kill, a woman on a waterbed is stabbed in the back of head through her mouth and a girl has both of her arms sawed off after boogying down to the electro-synthesizer disco beat in her aerobics class. There's also a charming sequence where a topless girl is sawed in half in a public bathroom stall.

Adding to the fun, we also get an all-star line-up of international suspects... Jack Taylor is a stuffy homosexual anatomy professor who has to teach a bimbo where her pectoral muscles are... but is he the one cutting them off? Paul L. Smith is a hulking groundskeeper who is always seen carrying around something sharp and pointy, and trims the bushes... with a chainsaw. How about ever-present college dean Edmund Purdom or police head-shrinker Gérard Tichy, who shows up to get a psychological profile on some of the suspects. Speaking of suspects, we also have obnoxious, self-proclaimed "campus stud" Kendall James (Ian Sera), who is presented as being a suspect even though he's about 30 years too young to be the killer kid from the opening sequence. However, he had "sexual relations" with more than one of the victims and is currently trying to get into the pants of Mary Riggs (Lynda Day George, credited as "Linda Day"), a tennis champ cum detective who goes undercover on campus in an effort to catch the killer. There's also a snoopy Boston Globe reporter (Isabel Luque) and a "kung fu professor" (?!?) who attacks Mary in the middle of the night for no apparent reason. Christopher George and Frank Braña are just two of the coppers on the case.


Pieces has the worst dialogue ever (the script is credited to producer Dick Randall and "John Shadow"/Joe D'Amato), is full of continuity errors and is too dark, idiotic and senseless, but it's also unintentionally hilarious and entertaining in the sleaziest, trashiest way imaginable. The surprise shock ending is unbelievably stupid and seems inspired by the similar ludicrous ending of Bava Jr.'s 1980 film Macabro / Frozen Terror. It was filmed in Boston and Madrid, Spain and was originally slapped with an X rating (which was converted over to an R a few years later).

SBIG
Posted by The Bloody Pit of Horror at 1:47 AM