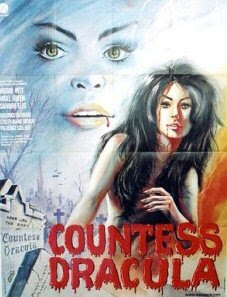 Directed by:
Peter Sasdy
Another treatment of the Elisabeth Bathory legend from Hammer studios, based on the novel "The Bloody Countess" by Valentine Penrose, is a pretty decent vehicle for Polish-born beauty Ingrid Pitt, who'd just gotten some attention for playing Carmilla in the hit THE VAMPIRE LOVERS (1970). The evil, aging Countess Elisabeth Nodosheen arrives in a small village to take command of a castle, where she discovers that she can regain her youth and beauty by bathing in the blood of young women. She has her own daughter Ilona (Lesley-Anne Down, who's young, whiny and a little grating here), then impersonates her and romances soldier Imre Toth (Sandor Elès), while killing busty Euro-babes with help from faithful servants Captain Dobi (Nigel Green) and Julie (Patience Collier). Though it got middling reviews when released, like most other Hammer films it isn't bad at all, especially compared to the crap we're subjected to nowadays. Pitt apparently was dubbed here for some reason (probably because of her thick Polish accent), but she's still responsible for a good deal of this films success because of both her sex appeal and the fact she's a good enough actress to delineate Elizabeth's distressed aged and glowing youthful personas.

Other aspects of the film, from the photography to the score to the costumes to the set/production design are pretty top notch. And don't be turned off by the PG rating, this features enough blood and nudity for an R. Also in the cast are Maurice Denham as the castle historian Master Fabio, Peter Jeffrey as the chief bailiff, Nike Arrighi and Susan Broderick and Marianne Stone as maids.
★★1/2
Posted by The Bloody Pit of Horror at 1:21 AM