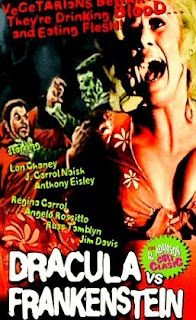 ...aka: Blood Freaks
...aka: Blood of Frankenstein
...aka: Blood Seekers, The
...aka: Revenge of Dracula, The
...aka: Satan's Bloody Freaks
...aka: Teenage Dracula
Directed by:
Al Adamson
THE BLOOD SEEKERS was Al Adamson's unfinished gore epic (well... actually it started life as a biker flick, but that's a long story...) filmed in 1969. He decided to shoot framing scenes adding the whole Dracula/ Frankenstein angle in 1971, and the whole package goes as follows... Mad Dr. Frankenstein (J. Carroll Naish) is busy at work reconstructing dead bodies while retarded manservant Groton (Lon Chaney, Jr.) spends most of the time whimpering and petting a puppy. When the doctor injects Groton with a special serum it transforms him into a lurking, laughing, sweating, beach-bunny-decapitating, axe murderer. The cops are already after them, but even more troubles arise when the echo-voiced Count Dracula (Zandor Vorkov) arrives and blackmails the mad doc into resurrecting the Frankenstein monster and giving him the blood of his victims! Meanwhile, in Las Vegas, a lounge singer (Regina Carroll) performs a lounge act called "She Travels Light." They try to make it look like it's a big production number by filming it in a large auditorium, but we only see an audience of about four people. Miss Carrol gets news of her sister's disappearance and heads off to Venice Beach looking for answers. She goes to a club, is slipped LSD in her coffee, has a substandard 70s trip out scene, then teams up with three hippies (led by Anthony Eisley) to find out what's going on.
Possibly Adamson's most famous film, and even though it's cheap, silly, trashy and completely nonsensical, there's enough going on here (and an interesting enough cast) to qualify it as a must see to die-hard horror fans. The cast is just overloaded with familiar faces. Aside from those already mentioned, Russ Tamblyn, Jim Davis, Forrest J. Ackerman (who plays a victim and also credited as the "technical advisor"), Angelo Rossitto, Gary Kent (also the assistant director and one of the make-up fx artists) and other swell folks appear. Future director Greydon Clark (of SATAN'S CHERRLEADERS fame) also has a small role, as does cinematographer Gary Graver, who also shot this one. The executive producer was Mardi Rustam, who also produced PSYCHIC KILLER (1975) and Hooper's EATEN ALIVE (1977). If none of these names are ringing a bell or if you're just not interested, then chances are you aren't going to be very amused by what you see here.

Not to be confused with 1969's Waldemar Daninsky opus LOS MONSTRUOS DEL TERROR (aka ASSIGNMENT TERROR aka DRACULA VS. FRANKENSTEIN) or Jess Franco's goofy DRACULA CONTRA FRANKENSTEIN (1972 aka SCREAMING DEAD aka DRACULA VS. DR. FRANKENSTEIN). Another side note - Some nudity and violence seem to have been removed so it could pass with a PG rating.
★★
Posted by The Bloody Pit of Horror at 11:44 PM