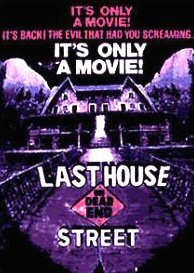 ...aka: At the Hour of Death
...aka: Cuckoo Clocks of Hell, The
...aka: Fun House, The
Directed by:
Roger Michael Watkins
The '70s were an ever-changing decade in American cinema. Given a reprieve from censorship for the first time since the early days when film was still in its infancy and darker avenues weren't being explored (at least graphically), filmmakers were finally able to express themselves how they saw fit without limitations. Some of the most radical, important, shocking and challenging films ever made came from this period of time, and these films spanned all genres. Here's one that's as graphic, gritty and grisly as they came back then; an independently produced horror flick that goes all out to shake up us viewers. It does so through presenting a bunch of repulsive, obnoxious drop-outs doing disgusting things to their victims around run-down buildings and grimy-looking sets. Shaggy-haired degenerate loser Terry Hawkins (played by the director), has just been released from a short spell in prison. Through vague voice-overs we learn that he's pissed off at the world and is looking for a way to vent out his frustrations. We meet some other like-minded people, including an out-of-work cameraman, a bored woman who flees her husband and a few others. Sometimes narration is used to describe who they are and why they chose their eventual path in life. Anyway, about five or six of these punks get together and decide to start making their own movies. Their porn loops are becoming a hard sell so they need to find something else to do... such as making their own snuff flicks. After a trial run strangling a bum, the group lure a movie producer, his wife and a couple of others to their hideout and then proceed to make the ultimate horror movie.

The majority of the "build up" of this movie consists of people complaining, people fighting, people aimlessly hanging around in dimly lit/dirty rooms, people filming, people having sex, black-and-white soft-core sex loops, a woman in blackface being whipped at a party and a trip to a slaughterhouse where a cow's throat is slashed. The feel is extremely nihilistic any way you look at it, but it does succeed in creating its own queasy landscape of depravity. Combine that with the dingy settings, the muddy washed out look of the photography, the jolting soundtrack, the frequent inspired moment in a sea of inept ones, the choppy editing and the loud, leering, unattractive cast and you've got yourself a true grindhouse flick in every sense of the word. The final 25 minutes or so is the "pay off" for gore hounds who like their flicks full of torment, suffering, screaming and sadistic torture. Some good use is made of dark corners, stage lights, echo and high camera angles, and the masks worn by killers as they gleefully murder their captives are pretty creepy looking (one is of a large, white bearded man and the others are those clear masks like the one used by the killer in ALICE, SWEET ALICE). A woman has her throat cut, a guy is slashed to death and another guy is forced to suck on a deer hoof (?) before having his eyeball gouged out. The most graphic murder has a screaming woman, tied down to a table, having her face slashed up with a knife, getting her legs slowly removed with a hack-saw and then having her all her innards yanked out. Hey, I think I just saw this exact same thing in GUINEA PIG: FLOWERS OF FLESH AND BLOOD a few weeks ago! These scenes are all done with the perpetrators spastically bouncing around filming their murders and laughing maniacally. Twenty/thirty odd minutes of that gets a little bit monotonous before all is said and done.

I guess one could single this thing out as an early example of the unpleasant/dull "torture" type flicks that seem to be popular these days (such as HOSTEL, CAPTIVITY, SAW, etc.). This one's a bit more interesting and effective than any of those, though. Filmed as THE CUCKOO CLOCKS FROM HELL in 1973, this film laid unreleased until 1977 when it was released with the new title and ad art to bring to mind Wes Craven's infamous shocker THE LAST HOUSE ON THE LEFT (1972). The director was a guy by the name of Roger Michael Watkins, who ended up working steadily in adult films in the 80s and passed away just last year. He didn't take credit for this film until 2000. In fact, Watkins used what may be a record number of aliases for just one film - "Steven Morrison" for the lead role, "Victor Janos" to direct, "Norman F. Kaiser" to produce, "Brian Laurence" for his script, "Brian Newett" for editing, "Bernie Travis" for post-production supervision and "Claude Armand" for stock music editor/re-mixer! Actually, almost every person involved on this used a fake name. The cut version is missing two minutes of footage.
★★
Posted by The Bloody Pit of Horror at 2:36 AM