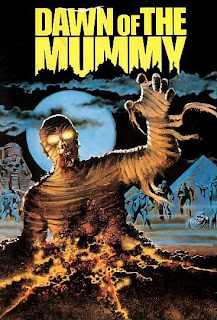 
Treasure or not, it's never a good idea to hang around newly discovered Egyptian tombs, and as Dawn of the Mummy goes to prove, it's also never a good idea to relegate most of your gory action to the last 15 minutes. Granted you can hang in there past the more boring passages, this does have some decent moments here and there. After a brief prologue set in "3000 B.C.," three modern day New York fashion models and a small photography crew (a couple of guys and a female make-up artist) head to Egypt to do a shoot. Deciding to try for something new since shooting at the pyramids and sphinx has been done to death, they take their jeeps deep into the desert to snoop around and see what else they can come up with. Lucky for them, a previously undiscovered tomb has just been discovered by some excavators looting the place. It's complete with hieroglyphic covered walls, lavish crypts, catacombs, secret passageways, statues, torches, pots, sarcophagi and even a musty old mummy laid out on a stone tomb. Perfect! Disregarding a freshly decapitated head they found nearby earlier in the day, the crew decide to pitch their tents, hang out and do the photo shoot there. A horse is found gutted, some acidic gunk burns a woman's hand, a guy pops up with half his face ripped off and a crazy old woman is lurking around screeching warnings of impending doom if they stay. And that's all during their first full day there! The women all want to leave, but the guy in charge of the trip (magazine head honcho and photographer) demand they stay to finish. You see where this is going, don't you?

A very tall, skinny, imposing, acidic (?!) and oily looking mummy (the make-up design is actually excellent) comes to life and resurrects his legion of zombie followers, who rise from the sand to help their good old buddy kill everyone off who has desecrated the tomb. Well, not just them it turns out, but basically anyone in the general area. A throat is ripped out, a body is pulled into the sand, a head is split in two with a butcher knife, people are dismembered, have their guts ripped out and eaten and have their eyeballs poked out. Much of this happens at the very end of the film, when the mummy and zombies crash a wedding being thrown in a nearby town's city square. It's an awkwardly directed / edited sequence but it's lively enough and even ends in an explosion.

The dialogue is awful, the acting is average at best (most overdo it a little bit, but it could have been worse) and the print quality of the DVD I watched was pretty dark and murky. However, the tomb sets are good, there's plenty of gore and even one terrific jump-out-of-your-seat moment almost identical to a famous scene from The Evil Dead.