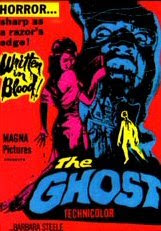 Set in Scotland in the early 1900's, this very welcome sort-of-sequel to THE HORRIBLE DR. HICHCOCK (1962) is from the same director and also features the same two female stars. The plot centers around sickly, wheelchair-bound Dr. John Hichcock ("Leonard Elliot"/Elio Jotta), whose death is hurried along by his beautiful younger wife Margaret (Barbara Steele) and her handsome doctor/lover (Peter Baldwin), in whose care Dr. H has unwisely entrusted. They poison him and then can't seem to find the fortune that should have been stashed in his safe. While they search the grounds, under the watchful eye of the loyal housekeeper (Harriet "White"/Medin), hubby's ghost seemingly returns to settle the score, driving the two of them to paranoia, madness and murder. The routine storyline is given a big boost by solid direction, atmospheric photography and, especially, the solid cast. Though the dubbing is a bit sketchy, this is a must for Steele fans. She's impressively evil in her role and gets a lot of screen time. The twist ending is great and is worth waiting for, as well. Umberto Raho co-stars.
★★1/2
Posted by The Bloody Pit of Horror at 12:13 AM