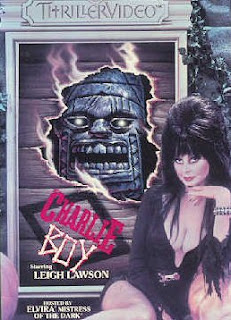 Directed by:
Robert Young
*I've decided to include all thirteen episodes from the short-lived TV series "Hammer House of Horror" on this website. There are two reasons for this: 1.) Each episode runs 50 minutes and is in essence a feature (short films technically clock in at less than 45 minutes). 2.) More importantly, in the mid-1980s each episode was released separately on video by the ThrillerVideo label and was further padded with commentary from horror hostess Elvira. Since these were very well distributed titles, and in keeping with the video-store feel of the website, I felt it important to keep these titles in the database and review them all individually.*
Not-bad entry in the series; well acted, with enjoyable lead characters, some creepy scenes and a few decent plot twists. Charlie Boy refers to a black, wooden African fetish (a voodoo doll possessing supernatural powers) that's found by our hero Graham (Leigh Lawson) amongst other antiques at his recently deceased uncle's estate. Unfortunately, the property and money has to be split down the middle with his pompous, greedy brother Mark (Michael Culver). Both originally planned to invest their newfound wealth in a film production company, but Mark decides to get greedy and bail out, leaving Graham frustrated and angry. Glancing over a picture of his brother and a few others in his social circle, Graham jabs a knife into the doll and inadvertently unleashes a voodoo curse that has to run full circle before it will stop. Everyone in the picture, not just Mark, become the target of "accidental" death as the curse runs its course. Mark ends up getting impaled on a piece of farm machinery after an unfortunate horse riding accident, a film director friend suffers an on-set accident involving a crossbow, the estate maid ends up dead in a bathtub full of blood... Before long, everyone in the picture is dead except Graham and his wife Sarah (Angela Bruce), who consult an occult expert (Marius Goring) and race against time to destroy the doll (which turns up missing). Likable cast, especially Lawson and Bruce, help anchor the story.
Score: 6.5 out of 10
Posted by The Bloody Pit of Horror at 6:41 AM