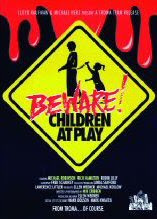 Directed by:
Mik Cribben
A college professor and his young son are camping in the woods. Dad steps on a bear trap, goes crazy and dies, then the son stabs his chest, pulls out his liver and eats it. Ten years later, that same now-teen boy (Danny McClaughlin) is hiding out in the woods and kidnapping kids for his cult of "woodies," who kill and eat the adults of a small town. The kids worship the legend of Beowulf and the leader calls himself Grendel. A controversial author of the paranormal (Michael Robertson), his bitchy wife (Lori Tirgrath) and their young daughter show up to help a friendly sheriff (Rich Hamilton) cope with the disappearance of his teen daughter (Lorna Courtney), who is now part of the cult. Eventually a redneck posse is organized by a "bible thumping moron" (played by the director) to go after them. If you like to see little kids getting killed in gory ways, you've got it here. When the posse attacks, they stab, shoot, impale and dismember a whole camp of the little psychos. One even has his head blown off with a shotgun! There's also a strange rape scene involving Grendel and the sheriff's (insane) wife (Robin Lilly). The enthusiastic little kids must have had a great time dressing in ragged clothes, running around in the woods and chanting, "Gulp the blood! Gobble the flesh!" OK, this is stupid, silly and cheap, with some of the most awkward and unnatural sounding dialogue scenes I've heard, but it's still a hell of a lot more fun to watch than the overrated CHILDREN OF THE CORN.

The director had previously appeared in an acting role in NIGHTMARE IN A DAMAGED BRAIN (1981), and done production work on a variety of other films since the mid-70s, such as SQUIRM (1976), THE DEADLY SPAWN (1983) and ROBOT HOLOCAUST (1986). Jim Muro (who had directed the gory cult hit STREET TRASH in 1987) operated the steadicam and went on to do the same on big budget Hollywood films, such as TERMINATOR II and TITANIC. It was filmed in Unionville, New York under the title GOBLINS and finally released by Troma (in a fun video box that I made into a T-shirt) in 1995.
Score: 3 out of 10
Posted by The Bloody Pit of Horror at 6:18 AM