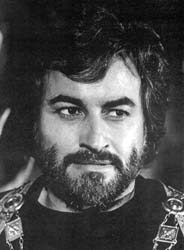 Spain's #1 horror star, Paul Naschy (born Jacinto Molina Álvarez on September 6rd, 1934 in Madrid) is also a frequent scriptwriter and director of his own badly-dubbed, but usually entertaining and atmosphere-heavy films. Like Boris Karloff and Christopher Lee before him, Naschy has played the gamut of movie monsters, tackling the roles of vampires, mummies, werewolves, hunchbacks, necrophiles, grave-robbers, serial killers, Satanists, phantoms, man-servants and such classic literary horror figures as Count Dracula, Quasimodo, The Phantom of the Opera, Dr. Moreau, Fu Manchu, Mr. Hyde and many others. The bad dubbing in these films often makes it a bit difficult to gouge Naschy's actual acting ability to us non-Spanish speakers, but he has a true presence, often tackles his horror roles with an appealingly old-school air of doomed romanticism and, with his short and stocky build, has perhaps a more relatable and 'everyman' presence than usual for this genre. Mr. Naschy passed away earlier today at the age of 75 after a long battle with cancer. It's a great loss to the horror community, but Naschy has left behind a wealth of work spanning a nearly 50 year period; much of which remains unreleased here in America and is still waiting to be discovered.

Before beginning his film career in the early '60s, Naschy attended the School of Architecture in Barcelona, designed record covers, wrote several Western novels under the name Jack Mills and was a champion, record-setting weight lifter. After being an extra in KING OF KINGS (1961), MESSALINA AGAINST THE SON OF HERCULES (1964) and several other features, Naschy made his horror film debut in a supporting role in AGONIZING IN CRIME (1967). Just one year later, he began his stint playing what would become his most famous and recognizable character; that of tragic, yet often heroic, werewolf Waldemar Daninsky, in the misleadingly titled (in the US, anyway) international hit FRANKENSTEIN'S BLOODY TERROR (1968 aka MARK OF THE WOLFMAN). Over the years, Waldemar (who is heavily influenced by Lon Chaney, Jr.'s brooding Larry Talbot) has been resurrected many times, much to the character's own disdain, to take on the forces of evil in many films such as NIGHTS OF THE WEREWOLF (1968; the only entry in the series that seems to be a 'lost' film), ASSIGNMENT TERROR (1969), FURY OF THE WOLFMAN (1970), THE WEREWOLF VS. THE VAMPIRE WOMAN (1970), DR. JEKYLL AND THE WOLFMAN (1971), CURSE OF THE DEVIL (1973), NIGHT OF THE HOWLING BEAST (1975; facing off against a Yeti), THE CRAVING (1980; facing off against Elisabeth Bathory), BEAST WITH THE MAGIC SWORD (1983) and LYCANTROPUS: THE MOONLIGHT MURDERS (1996). In addition, Naschy also scripted every single one of those, directed two of them and produced one.

Naschy also appeared in dozens of other non-werewolf genre films such as SEVEN MURDERS FOR SCOTLAND YARD (1971; playing an alcoholic ex-circus performer and suspect in Jack the Ripper-style slayings), BEYOND THE LIVING DEAD (1972; a necrophile assistant to a mad doctor), COUNT DRACULA'S GREAT LOVE (1972; the title role hiding under the guise of an Austrian doctor), VENGEANCE OF THE ZOMBIES (1972; a Krishna cult guru and his evil, disfigured brother), HUNCHBACK OF THE MORGUE (1973; one of his very best roles, playing a depraved but sympathetic grave robber) and THE MUMMY'S REVENGE (1973; the title role). Naschy also played a dual role in HORROR RISES FROM THE TOMB (1972) and gave one of his better performances as both a sadistic, resurrected Satanist and his descendant. In the awful EXORCISMO (1974), he stars as a troubled, guilt-stricken priest who tries to redeem himself by saving the life of a young woman (Grace Mills) possessed by evil spirits. Naschy co-wrote the script with director Juan Bosch and claims it was written before The Exorcist (1973). Ironically, several of Naschy's personal favorite films, and likewise favorites of his die-hard fans, are more atypical of his usual work and have never officially been released in America. These include THE PASSENGERS (1974), THE FRENCHMAN'S GARDEN (1977) and THE TRAVELER (1979).

After an impressive 10+ year run, 1980's THE CRAVING (recently reissued on DVD as NIGHT OF THE WEREWOLF) marked a pivotal moment in Naschy's career. Although the film was solidly made and had incredible sets and atmosphere to burn, the sort-of remake of his international hit WEREWOLF VS. THE VAMPIRE WOMAN was a big flop in its home country and caused him to seek funding in Japan for further projects such as THE BEAST AND THE MAGIC SWORD (1983). While there, he directed around ten documentaries for Japanese TV. A few years later, he appeared with fellow cult stars Caroline Munro and Howard Vernon in HOWL OF THE DEVIL (1987), a film he also directed, wrote and co-produced. There, Naschy got to display his versatility by not only playing conflicted brothers Alex and Hector, but also portraying Mr. Hyde, The Frankenstein Monster, The Wolf Man, Quasimodo, The Phantom of the Opera and more! Unfortunately, that film never received a U.S. release either. Naschy played Fu Manchu (in 1990's comedy short THE DAUGHTER OF FU MANCHU), returned to the director's chair for NIGHT OF THE EXECUTIONER (1992), appeared in the Belgian psycho-thriller STATE OF MIND (1992; which is now being distributed by Troma) and received top-billing as "The Watchman" in the slasher SCHOOL KILLER (2001).

In 2003, Naschy came to the US to appear in two films; one for cult director Fred Olen Ray (TOMB OF THE WEREWOLF, where he played Waldemar yet again, this time speaking just a few lines in English and facing off against Michelle Bauer's Countess Bathory) and Donald F. Glut's T&A-heavy COUNTESS DRACULA'S ORGY OF BLOOD. Back in Spain, he continued to appear in both film and TV productions and on the stage. Naschy sometimes used the aliases Paul Mackey, James Molin, David Molva and Jacinto Alvarez throughout his career. If you want a more in-depth look at the life and career of Naschy (plus information on all of his newest projects), please take time to visit the excellent site The Mark of Naschy.

I've seen People Who Own the Dark and The Craving but still need to write reviews for them. This week, I'll set aside some time to review several Naschy films I have in my collection that I haven't gotten around to yet.
Posted by The Bloody Pit of Horror at 3:50 PM

This was a great bio/tribute to a horror performer who didn't always get his due!

Thank you! As I was writing it I was like "Damn, I haven't seen as many Naschy movies as I thought!" Oh well, I'll try to catch up with his stuff as much as possible in the coming weeks. I'm also still working on my Michael Gough bio. He turned 96 last week but I got sidetracked doing Karloff. :)

I've always wondered why Naschy was so insistent that his godawful Exor-sploiting EXORCISMO was written before THE EXORCIST. I imagine something of it did exist before, but the film clearly lifts heavily from the Friedkin picture (including its offensive conservatism). In any case, though, if I'd written something like that, I'd have blamed THE EXORCIST for it, and said "Hey, you can't have a good movie every time."

I didn't know Naschy had ever played Fu Manchu. Now, I'm curious about that one.

As far as writing the script first, I guess there's the outside chance they ripped off the novel, which was published in 1971. Either way it's pretty obvious that Naschy and co. also saw the movie version before making their version, which I agree, completely sucks. The biggest mystery of the Naschy filmography is the first Hombre Lobo sequel. I think Naschy himself is the only person to actually verify it's existence.

The movie where Naschy played Fu Manchu (THE DAUGHTER OF FU MANCHU, 1990) doesn't appear to have ever been released. IMDb lists it as a "comedy/short."

cinemarchaeologist said...
This comment has been removed by the author.
December 3, 2009 at 2:00 AM

"The biggest mystery of the Naschy filmography is the first Hombre Lobo sequel. I think Naschy himself is the only person to actually verify it's existence."

All I've ever read about it over the years is that the director died during production, and it was never finished.

"The movie where Naschy played Fu Manchu (THE DAUGHTER OF FU MANCHU, 1990) doesn't appear to have ever been released. IMDb lists it as a 'comedy/short.'"

I did a little poking around and found mention of it at the Page of Fu Manchu--it was apparently just some little short done for the fun of it. There's a pic of Naschy as Fu there (near the bottom of the page:
http://www.njedge.net/~knapp/movies4.htm

A very sad day. RIP to the legend Paul Naschy.

The guy at the Mark of Naschy site goes into good detail about the film right here...

So I guess Naschy himself claims he finished it and left France but doesn't know what happened to it.