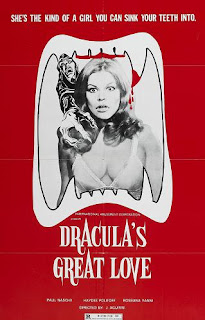 
Somewhere in Europe in the late 19th Century, a coach full of passengers (four women and their male escort) are traveling through a mountainous region when they lose a wheel. It rolls downhill, a horse kicks their coachman in the head (killing him) and everyone else hikes to a local sanitarium before nightfall. The sanitarium, where we've already seen a guy get his throat ripped out and another get an axe to the head during the pre-credit sequence, is home to Austrian doctor Wendell Marlowe (Paul Naschy). Rumor has it he's going to fix the place up and start using it again despite its sordid history. Wendell invites the travelers inside and allows them to stay until they can make arrangement to get their coach fixed. But obviously Wendell's not who he claims to be. If you haven't already guessed from the title, Wendell is actually Count Dracula... and he needs a virgin to fall in love with him. It all has something to do resurrecting the skeletal "Countess Dracula," who's being kept tucked away downstairs in the coffin room until the Count gets what he needs.

Of his guests, there's Marlene (Ingrid Garbo), but she's already given up her virtue to their lone male traveling companion Imre ("Vic Winner" / Victor Alcázar). Then there's Senta (Rossana Yanni), who has the hots for Wendell/Dracula, but her sexually aggressive behavior doesn't quite spell out "untouched maiden." Elke (Mirta Miller) is a cowardly whiner, so that's leaves friendly-but-prudish Karen (Haydée Politoff) as the count's primary target. The two go on moonlit walks as he attempts to court her, one by one each of the guests is bitten and transformed into a vampire and a creepy guy named Karkov (José Manuel Martín) lurks the hallways. Eventually, the new vampire gang are taking midnight trips to the nearest village to munch on young ladies, while Karen is kept locked in a cell to function as a convenient blood pump.

This Spanish spin on the overcrowded vampire/Dracula subgenre has some problems (including a sloppy/rushed finale and clumsy use of narration), but for the most part it's a fun, stylish and very entertaining effort. The plotline is old-fashioned in the extreme (not necessarily a bad thing), but spiced up with lots of female nudity (including some mild lesbianism) and blood. The sets and locations are both good, the cast is attractive, it's atmospheric and the camerawork is sometimes great, including wonderful panning shots across the foggy forest. The night scenes are also shot with a handsome blue hue.

This is one title you need to do your homework on before purchasing. A few years ago I bought a copy from a company called Sinema Diable, who used a substandard, dark VHS source print. Their version has complete audio fallout on at least three occasions, several picture rolls and is horribly cropped, beginning as fake widescreen (likely to cut out another company's logo on the bottom) and suddenly switching to full-screen mode a few minutes later. On the plus side, not that I actually want to give them any credit, it seems to be the mostly uncut, 82-minute version of the film. Some of the earliest video and DVD releases run just 72 minutes and remove all of the nudity and some of the violence. BCI/Eclipse eventually stepped in and released the best quality version yet in 2008 under the alternate title Cemetery Girls. It's double billed-with the almost completely worthless Filipino "comedy" VAMPIRE HOOKERS (1978).