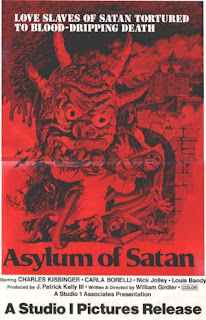 
Bill Girdler's dubious debut (originally titled The Satan Spectrum) was shot on 16mm on a budget of just 50,000 dollars in his usual stomping grounds of Louisville, Kentucky. Attractive pianist Lucina Martin (Carla Borelli) checks into an ordinary county hospital for fatigue but wakes up in a nuthouse called Pleasant Hill Hospital where she's told she's had a breakdown. Lucina's first introduced to the "butch" head nurse Martine, who speaks in a thick dubbed German accent and is obviously played by a man in drag! It isn't long before Lucina realizes she's being held there against her will. The doors and windows are locked, most of the wheelchair-bound patients are dressed in hooded white robes and hospital director Jason Specter (Charles Kissinger) refuses to let her leave or speak to her primary care physician. He also sends away Lucina's fiance Chris (Nick Jolley) when he shows up there looking for her. Good thing Lucina has Martine's loving touch to fall back on as she gently scrubs her back during a touching bath time interlude while someone spies on them through a peephole.

Chris goes to visit Lucina's real doctor, who claims his patient's father signed her release and that Dr. Specter is at least eighty years old. Knowing his future bride's father passed away when she was a child and couldn't have authorized a transfer and that Dr. Specter isn't anywhere near the age he's supposed to be, Chris suspects foul play and enlists the aid of copper Lt. Tom Walsh (Louis Bandy) to find out what's going on. Meanwhile, some of the patients at the asylum are being killed off. A woman in a wheelchair is pushed into a room, smoke pours from a vent and rubber bugs (I think they're supposed to be tarantulas) crawl all over her. Some of the hooded inmates burn a guy to death with torches and a blind girl (Sherry Steiner) is ambushed by snakes while taking a dip in the indoor pool. In case you haven't figured it all out already, the doctor, staff and some of the patients at Pleasant Hill are actually devil-worshippers sacrificing people to the almighty dark lord down below, who makes an eleventh hour cameo appearance here looking a paper mache creation designed by a 3rd grader.

Combining Satanism with loony bin antics is potentially a fun idea, but this is a poorly done movie regardless of the meager budget. It's badly written, badly directed, badly acted and badly lit and photographed. I also decided against giving it a "SBIG" merit badge. Despite a few cheap chuckles and moments of redeeming weirdness, most of the time it's just dull. I kept checking the clock to see when the 78 minutes were going to be up and the drawn-out finale seems like it lasts for an eternity. There are a couple of twists; one of which is completely predictable while the other is downright stupid. Though Kissinger has a few good moments, most of the rest of the cast is overwrought and annoying. But I guess I'll give Schupp and Snyder, Inc. a shout-out for their fabulous 70's fashions, including a stunning turtleneck with plaid bell bottoms ensemble.

Mimi Honce (Scalpel) and James Pickett (who also did the special effects and starred in Girdler's THREE ON A MEATHOOK next, along with Kissinger and Steiner) co-star. It was filmed in 1971 but not released until four years later. The DVD from Something Weird pairs it with the equally-awful (but much funnier and more interesting) SATAN'S CHILDREN (1973) and the utterly worthless short subject THE SOUL SNATCHER (1965).