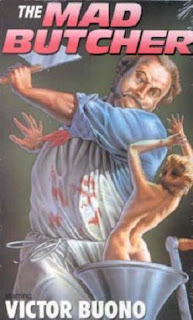 Otto Lehman (Victor Buono), the self-proclaimed "best butcher in Vienna," has just been released from a lunatic asylum and into the care of his unloving wife Hannah (Karin Field), who can't wait to start nagging him about being overweight and fretting over what the neighbors will think of him being institutionalized for three years, amongst other things. Otto immediately returns to his butcher shop, shoos away his incompetent brother-in-law Karl ("Carl Stearns" / Luca Sportelli) and gets back to work, taking a break every once in awhile to take a gander at his sexy neighbor Berta Hensel (Franca Poleselli), who likes to strip at her window every night. Some neighborhood cats get on his nerves with their constant wailing, so he kills one with a wine bottle. His shrill wife doesn't let up on him either, so he snaps again, breaks her neck, puts her through his trusty industrial-sized grinder and makes sausages out of it. To his surprise, the new human meat product become an instant hit with customers and he has lines around the block, which means he now has an ideal way to dispose of any person who gets on his nerves.

Across town, bored reporter Mike Lawrence (Brad Harris) is so bored that he finds a news story in another town about a 15 year old boy raping an 80 year old woman to be "beautiful." He begins dating Berta, while getting on the nerves of an incompetent local police inspector (Dario Michaelis) investigating the disappearances of several local women, including a prostitute named Frieda (Hansi Linder) that Karl brings home one night. Otto gets fed up with Karl, kills him and then invites Berta to spend the night after her landlord throws her out. Can Mike come to the rescue before his new girl is turned into a sausage link?

This Italian/West German co-production aspires to be an outrageous and quirky black comedy but it misfires in the worst way possible. The movie is short on story as it is, but the filmmakers do absolutely nothing clever to help spice up an already simplistic scenario. The script, courtesy of producers Dag Molin and "Robert H. Oliver" / Dick Randall, is, in a word, terrible. There's not a single good one-liner or visual gag at any point in the film, it's not ambitious enough to bother finding something to actually satirize and it's not even up to the task of being in such bad taste that the premise can be worked for sick humor. We not only have a film that's not the least bit funny, but one that also fails at being horrific, with the few horror elements very restrained (off-screen, bloodless kills and 'light' music plays during them) throughout. The only thing it really has to offer are a few pairs of bare breasts and that's certainly no reason to sit through it.

Mr. Buono (who does what he can here under the circumstances) was one of Hollywood's most unique and wonderful character actors while he was around, but it's a shame to see him being wasted here on substandard material. If you want to see him utilized to his full potential, check out What Ever Happened to Baby Jane? (1962) or the underrated sleeper THE STRANGLER (1964). And if you want to see a dark comedy involving cannibalism done the right way, check out Eating Raoul (1982) or Delicatessen (1991).

The Something Weird DVD release, which retains the original U.S. theatrical release title The Mad Butcher for the packaging though Meat Is Meat is the actual on-screen title, is a surprisingly sharp, colorful, good-looking print of the film. Aside from Buono and Harris (whose real voices are used), the cast have been English-dubbed.