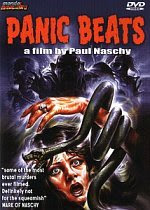 This isn't all rotten if you hang in there. It's like a trashy Gothic soap opera running at half-speed with pretty decent acting, mild sex scenes, plenty of female nudity and a hilariously mean-spirited and lecherous roster of characters who use, deceive, manipulate, seduce and kill other people without thinking twice about it. It opens with a foggy, great-looking, atmospheric scene of infamous sadist Alaric de Marnac (laid over from Naschy's fun 1972 film HORROR RISES FROM THE TOMB) tracking down a (nude) victim on horseback before mauling her to death. In modern times, Alaric's look-a-like descendant Paul (Paul Naschy/Jacinto Molina) decides to take his terminally ill, wealthy wife Genevieve (Julia Saly) out to his secluded childhood home for a much needed break from the stress of big city life (and possibly buy her some more time). Waiting for them at the home are elderly maid Mabile (Lola Gaos), who's been around since Paul was a young child and used to spook him with stories about the family lineage, and her sexy niece Julie (Paquita Ondiviela), who had a rough childhood and claims she is looking to make something of her life. A month after arriving in the home, Genevieve has gotten close to both Mabile and Julie and her health is improving, but the peace doesn't last long as she's haunted by mysterious visions of Alaric back from the dead. It doesn't take a rocket scientist to figure out that the forces conspiring against her are actually in human - not spirit - form, and said forces want her dead to get her money, but the less I reveal about this one the more you will probably enjoy it. It does sound like your standard issue psycho thriller, and in most ways it is a bit on the ordinary side, but the story does hold a few surprises that I won't spoil.
One of the things that this movie has going for it is that none of the characters are portrayed as saints and there's a certain duality to everyone, making the interplay between them a bit more interesting and unpredictable than what you normally see. The cinematography is competent; very stylish and colorful any time some-thing "supernatural" is going on. The four leads are all good. Plus there's one moment of over-the-top gore that will definitely catch you by surprise. It's worth a look. Also in the cast are Silvia Miró as Naschy's mistress, Manuel Zarzo and José Vivó as doctors and Salvador Sáinz as a priest.
Go straight for the Mondo Macabro DVD (an excellent print with a load of interesting special features); quality for the Spanish language VHS version and the subtitled VSOM video don't do the film justice.
★★
Posted by The Bloody Pit of Horror at 12:19 PM