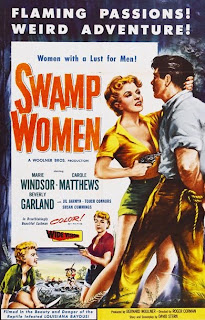 
For starters, I'm not sold on this being even a partial horror film, despite a couple of scenes that could land it in the genre. The two reasons it's being included on this blog is... 1.) IMDb currently lists it as horror, as well as adventure, crime, romance and thriller. 2.) For some strange reason it's a staple of those multi-horror packs, so many horror fans are likely to see it anyway. In addition, it was also the target of MST3K ridicule, so that helped solidify my decision to go ahead and throw it on here. What bracket it mostly belongs to is "Girl Gang;" a subgenre of films about tough criminal tootsies who sass, fight, rob and kill without giving it a second thought. Others in this very fun category include Ed Wood's THE VIOLENT YEARS (1956), GUN GIRLS (1957), TEENAGE GANG DEBS (1966) and H.G. Lewis' SHE DEVILS ON WHEELS (1968). Corman's film, his directorial debut, actually preceeds all of those. According to an IMDb keyword search, it may actually be the first of such films.


What's left of the Nardo Gang (all the men were apparently killed); even-keeled, experienced Queen Bee Josie Nardo (Marie Windsor), violent-tempered redhead Vera (Beverly Garland) and hot-blooded blonde Billie (Jil Jarmyn), are wasting away in prison and withholding information about a buried box of diamonds hidden somewhere in the Louisana swamplands. Police woman Lee Hampton (Carole Mathews) goes undercover as their new cellmate and stages a bogus breakout to get the gang to lead her to the diamonds. The ladies get to their escape car, drive as far as they can go, ditch the car and then head in the bayou by foot. They run across ladies man Bob ("Touch"/Mike Connors) and his whiny, busty date Marie (Susan Cummings), shoot their guide dead, steal their canoe, force Bob and Marie go along as hostages and transform their jeans into cut-offs that Catherine Bach might think twice about wearing. The rest of the film plays out as a series of scenes with the ladies either rowing their canoe through swamp waters or camping out, where jealousy, geed, lust and backstabbing rear their heads long enough to undermine their plans of splitting the diamonds. For action, there's a rubber alligator attack, a rattlesnake attack, a spearing and loads of catfights.


So is SWAMP WOMEN as bad as most people say it is? Yes and no. The film is extremely low-budget, even by Corman standards. It was shot in Pathécolor; an early manual stencil-based film tinting process, meaning the colors are flat and muted. The film also suffers a bit from a couple of wooden supporting performances, sloppy editing (especially during the gator attack scene), badly incorporated stock footage and other issues associated with low-budget films of this era. Regardless of all that, I found this mildly enjoyable overall. There are some hilarious one-liners, the premise (while utterly ridiculous) is fun and Windsor, Garland and Jarmyn all bring something enjoyable to this film, and that's a good thing because there's more talk than action. Connors just looks amused and spends the majority of the film with his hands tied behind his back watching the ladies go at it (and fight for his affections). Jonathan Haze has a small role as a drunken pickpocket in the opening scene.

This is a very entertaining movie. Garland is great as the tough lunatic but I wouldn't call it horror either.

Garland is always great. She puts today's "Scream Queens" to shame. The two titles of hers that have eluded me over the years are The Neanderthal Man and The Mad Room, but hopefully I'll be able to find those somewhere and watch them. I also need to rewatch It Conquered the World since it's been ages since I've seen it. I think Swamp Women might be listed as horror because it has been distributed as one by some companies. Some of the DVD covers, such as this one...