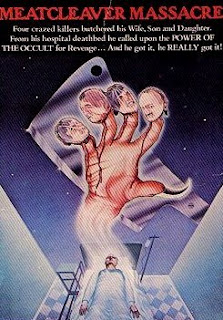 ...aka: Evil Force
...aka: Meatcleaver Massacre
...aka: Revenge of the Dead
Directed by:
Evan Lee
Top-billed Christopher Lee actually just appears here as an on-screen host, whose four minutes worth of pre-credit intro footage and three-minutes of prologue have absolutely nothing to do with the movie we’re about to watch. He discusses the occult, souls freeing themselves from sleeping bodies, the legend of King Guntrun the Rich, evil manifestations with demonic powers, “dog-headed hags with bat’s wings, bloodshot eyes and snakes for hair,” Arestes, Oedipus and the Furies. According to Lee himself, he filmed his footage for something else and the producer of the original project ended up selling it to these cats without his consent, who then advertised their awful film as "starring Christopher Lee." He was planning a lawsuit, but then said fuck it because of the time and cost that would have to go into it.

After Lee’s intro we’re in a classroom at “Valley College” where Professor Cantrell (James Habif) shows a slideshow about “Morac, destroyer of the destroyers,” a giant, green, three-eyed demon that supposedly can be called forth by saying a Galic chant while under “dire circumstances.” His problem student – Mason (Larry Justin), sexually-frustrated Dirk (Doug Senior), long-haired hippie Sean (Robert Clark) and sex club patron Phillip (Bob Mead) are bored one night and decide to get high, get drunk and cruise around Hollywood Boulevard. Mason also thinks it would be swell to run on over to Professor Cantrell’s house to terrorize him and his family. The guys slip pantyhose over their heads, hop a fence, stab the family dog “PooPoos” to death and then creep into the home.They club the professor over the head with a candlestick, strangle his wife, kick the son in the balls and strangle him with an electric cord and then stab the daughter in the face several times. The police are stumped, but Prof. Cantrell manages to survive the attack and stays conscious long enough to see the only clue left behind (a patch from Mason’s jacket that got ripped off) before slipping into a coma. Though in and out of his coma, Cantrell is somehow able to recite the Morac chant, except he doesn’t do it in Galic. And that begs the question - Why even make unnecessary rules if you’re not going to follow them?

Supernatural forces then kill off the four guys one-by-one. One is slashed to death while hiking in the desert by what appears to be a fern. Another has a car hood slammed down on him repeatedly. The third has his face burned off when a fuse box at the movie theater he works at explodes in his face. And the dreaded demon (which is very hard to see and looks absolutely nothing like the monster in the picture) shows up for the final murder. Voice-overs are used for more than four characters. Did they screw up the sound or something? During one scene, a suicidal character compemplates slitting his wrists and thinks, “Oh Jesus, this is gonna make an awful mess. I sure hope the landlord isn’t going to be super upset about it.” Groan.

Because the plot isn’t good enough, this movie does whatever it takes to fill time. There’s a nightclub scene of a stand-up comedian making fun of gays and does a Peter Falk impersonation. Then there’s a boring five-minute long b/w nightmare scene basically featuring a guy walking around by the beach. Another long and drawn-out scene in a seedy area of Hollywood, which we know is seedy because it keeps showing signs for “Club 69: Delicious Girls” (!), the “Sexual Catharsis Center” (!!) and the “Institute of Oral Love” (!!!), is simply an excuse to include the film’s sole topless scene (courtesy of Natasha, who was smart enough not to provide her last name). And let’s not forget the useless scenes of a detective (J. Arthur Craig) investigating the murders who seldom crosses into the same frame with any of the main actors.

After the movie ends (thank you Jesus!), Lee tells a story about shamans changing the weather. "Gordon"/Guerdon Trueblood (the director of THE CANDY SNATCHERS and also the cinematographer of this one) shows up at the very end, and his son is also in it for a second. And so is an actor named Ed Wood. Nah, couldn’t be!
★
Posted by The Bloody Pit of Horror at 3:21 AM

Wow!This film has a notorious history due basically to Lee's role. I never really knew the plot! I might have to check this out soon. Ed Wood has a credit? Seems late in his life to have been associated even with something like HMM but ya never know. Especially if his credit was something like "angora sweater supplier"!

It's really bad, and not in a very enjoyable way in my opinion. Might be worth checking out to see Lee for a few minutes, but other than that it's pretty awful. The Ed Wood in the credits probably isn't THE Ed Wood. I don't remember seeing him anywhere in the film and in the end credits his character name isn't even given, though when I checked on IMDb the person played a photographer which means it was probably a guy at one of the crime scenes for about 10 seconds who doesn't even have any dialogue. So probably not the same guy. Ha @ angora sweater!

This was a standard at the drive-ins in, and around, Detroit in my youth. Back then we could drink at eighteen, and a drive-in was a great place to get drunk, this was pre-MADD mind you, and I must of seen this movie a half dozen times, and not amount of alcohol ever made the movie watchable. Except for one actor, this was the end-all to be-all for every actor's career.

Awful indeed! Hard to imagine what the fate of this one would have been had they not had the Christopher Lee footage to tack on.