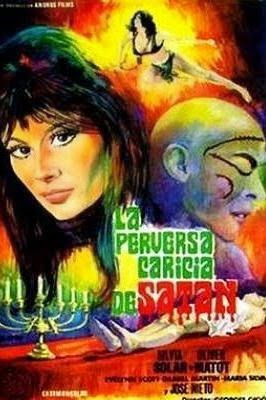 
A seance! An ancient castle! A mad scientist! A zombie! A rapist dwarf! An "avante-garde fashion show" featuring models who dance so horribly and are wearing such hideously ugly one-piece bell bottom outfits while dancing so horribly that I laughed until I cried and then rewound the movie five times to watch it all over again. Take all those elements, add some chintzy gore, grave-robbing, Satanism and a little nudity, stir together, and you have this economy-budget Eurotrash effort that's sure to please fans of senseless cheese. At a large Gothic castle, Duke Victor De Haussmont (José Nieto) is throwing a party. Since his festivities have been getting a bit stale lately, he's brought in evocative Claire Grandier (Silvia Solar) to liven things up a bit. Claire is bitter because she used to be a wealthy countess with a promising future as a medical student and now she's working as a medium. Years earlier, her husband killed himself and the Duke and his family cashed in on his death while doing nothing to help Claire when she needed it. Now she wants revenge. Accompanying Claire to the party is Professor Ramar Gruber ("Oliver Matthau"/Olivier Mathot), an expert on telepathy who has been experimenting with the regeneration of animal cells (?) on the side. Together, the duo make up "the inseparable union of life... the spirit and the magic." Confused yet? Just wait. It gets worse.

After the fashion show, all the models decide to go check out the seance except for one named Betty (Mara Vador), who stays behind to take a shower. The creepy voyeuristic butler Charles (José Ruiz Lifante) peeps in on her showering, watches her change clothes, then tries to rape her and finally slaps her in the face for trying to steal a little gold box. After adequately proving their abilities, the duke offers up his hospitality to Claire and Gruber, promising to give them room, board, a place in the cellar to set up a lab and funding for their experiments in exchange for them teaching him occult sciences. They agree, and the duo move in. The Professor starts work on his experiments, while Claire plots to use Satanism to get her revenge. Meanwhile, Loreta (Evelyne Scott) the maid is having sex with the stable boy Jean (Juan M. Solano). Well... I guess that has absolutely nothing to do with the plot but they wanted to throw that in there, anyway.

While out horse riding, Claire comes across a mentally-retarded dwarf serial rapist (!), brings him home, gives him food and has sex with him so he'll help them out. They all dig up a mangled corpse and bring it back to the lab. The doctor reconstructs the head and gives it a shot of his special "catalyptic serum," then Claire does a ceremony that involves reading from a Satanic text and killing a chicken. The dead guy (basically some bald skinny guy with a protruding rib cage, a couple of scratches and a stitched up eye) then comes to life as a zombie. Professor Gruber can control it with his telepathic abilities. That evening they send it upstairs to strangle the Duke, who happens to have a cigarette in one hand and a candelabra in the other (!) so when he burns up in bed after being strangled to death the authorities think nothing of it.

The Duke's playboy photographer nephew Richard (Daniel Martin) then inherits the castle, moves in and decides to let Claire and the Professor stay to continue their experiments, but the duo start losing control of their monster because the Professor's bad heart can't handle it any longer. Right in the middle of having an erotic dream about some woman horseriding naked and running around in a field in a sheer outfit (!), the rapist dwarf (Ronnie Harp) gets strangled to death by the monster, who then sneaks upstairs and gets Loreta too before escaping the castle to going on a little rampage around town. Claire puts "the power of Astra" into Loreta so she turns into a killer zombie, too, then stabs her lover to death with a pair of scissors. The Duke's model girlfriend Susan (María Silva) shows up for a visit and ends up getting chased around the grounds by the bald zombie. Will she become the next victim?

If you bothered reading all this, you can probably tell this movie tries to cram way too much nonsense into its 93 minute run-time for any sane viewer to handle. It seldom makes sense, some of the character motivations are muddled and the film completely lacks any kind of protagonist. Most of the time it's centered around Claire and the Professor, then treats their demises as almost an afterthought while attempting to switch attention around to Richard and Susan during the last 25-30 minutes. It's too bad neither Richard nor Susan are the least bit interesting, we know nothing about them and we could care less about what happens to either of them. To make matters worse, the filmmakers also try to squeeze a police investigation in at the very end, as well as a scientific study into a zombie, which are two other half-assed subplots we could care less about by that point.

The sets are pretty good, as is the photography, but most of the acting and dialogue are bad, the pacing is awful and the generic organ score isn't very good either. The best thing about the film is actress Silvia Solar. She cuts a striking figure with her exotic looks, jet black hair, long black eyelashes and mostly black wardrobe, and hits just the right note of bitchy villainy to keep this mess at least someone watchable. I always remember Lifante in these things, too, but that's probably just because he's so odd and creepy looking.

The cast also includes Víctor Israel (who's only in the first scene), Carlos Otero as one of the castle's three (!) butlers, Moisés Augusto Rocha ("Jack Rocha" here) as the zombie and the director (who is also billed as Jordi Gigo) as "The Annunciator."