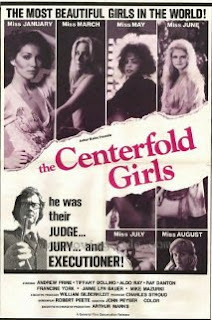 Directed by:
John Peyser
Episodic drive-in trash is divided into three separate stories. All feature repressed psycho Clement Dunne (Andrew Prine), who wants to “help” centerfold models. And by "help," I mean kill them because they exhibited their bodies for the world to see. He’s already cut Miss January’s throat and buried her on the beach, and now he’s moving his way down Bachelor Magazine’s Centerfold Calendar of young lovelies.

Nurse Jackie Carroll (Jaime Lyn Bauer), Miss March, is on her way to a new job when she pulls into a gas station and stumbles across Linda Williams (Janet Wood), who’s upset that she’s been stood up by her boyfriend. Jackie agrees to give her a lift as far as she’s going and the two end up at Jackie’s parents secluded vacation home. As it turns out, Linda was lying about being stranded and has set Jackie up. Linda’s three obnoxious, loud drifter friends; Tim (Dennis Olivieri), Rita (Teda Bracci) and Donna (Talie Cochrane) all barge in, wreck the place, steal stuff, slap Jackie around, drug her, paint her face with makeup, grope her while she’s sleeping and threaten her with rape. She manages to get away and make it down to a hotel run by Ed Walker (Aldo Ray). The police are called, but her hippie attackers are all long gone by the time they show up. If that’s not bad enough, Ed’s wife Millie (Paula Shaw) kicks her out because she assumes she’s a tramp. When Ed drops her off back off at her place, he also tries to rape her, but decides not to because she doesn’t struggle enough (“Even the worst main street sluts put up a fight… When it comes that easy baby, it’s not worth it.”) And to cap off Jackie’s wonderful experience, Clement mosies in and cuts her throat! Lead actress Bauer (who posed for Penthouse Magazine the same year under the name "Jessica Len") went on to play Laura Spencer on One Life to Live, so I guess her role here prepared her for everything she'd be dealing with in soap opera land.

Next up, college student Charly (Jennifer Ashley), Miss May, has landed a job doing a nude photo shoot on a remote and uninhabited island with just one rental cottage on it. In charge of the gig are a pair of bickering former lovers; aging former model Melissa (Francine York) and casting couch sleazebag Perry (director Danton). Also going along are photographer Sam (John Denos) and two other models – Glory (Ruthy Ross) and Sandi (Kitty Carl). They’re all dropped off on the island by caretaker Mike Mazurki. who plans on coming back to get them in a few days. Clement manages to steal a boat and sneak on the island, and then prowls around killing everyone off one-by-one. One girl is pushed off a cliff, another is stabbed in the shower and more necks are slashed. This segment starts well, but becomes silly and sloppy by the end. But I did realize something while watching it. The 1990 flick BIKINI ISLAND (which is moronic but I still like it) is nearly identical and completely ripped this one off.

Finally, Clement goes after Vera Porter (Tiffany Bolling), who was Miss July and works as a stewardess. He sends her yellow roses, threatens her on the phone and kills her friend Patsy (Connie Strickland) thinking it was her. Vera flees to another town to hide out in a motel, but her moronic friend Pam (Anneka Di Lorenzo) tells the killer where she’s hiding and he shows up there looking for her. When Vera receives more flowers at the hotel and receives another phone call from the killer (who she hasn’t seen yet), she gets in her car, drives off, gets a flat tire and hitches a ride with two horny sailors. The sailors drug her beer and then rape her. Clement shows up to give her a ride home, but Vera turns out to be one tough cookie. At least they saved the best segment for last.

While nothing spectacular (or even good), it’s a fairly entertaining exploitation flick loaded with familiar faces and T&A that gets the job done when it comes to mixing sex and violence for the drive-in movie crowd for which it was intended. Definitely something that could easily be labeled “sexist” or “misogynistic” (something I won’t disagree with) for its mean-spirited, sexual violence and humiliation scenes directed toward (often nude) women.
.
Prine – decked out in thick glasses and a business suit with pants too short so his white socks are always showing - is great in his role as the square psycho, who is so pure of heart he goes back to his all-white apartment to sip wine and listen to records – in between killings. Prine plays it completely straight in a way that’s effective if taken at face value, yet highly amusing when in the context of this sleazy film. Of the supporting cast, Bolling brings the most verve to her role. Also here in smaller roles are Jeremy Slate as a detective, John Hart as a sheriff, Dan Seymour as a propreitor and Janus Blythe (as “Janis Lynn”) as Charlie’s roommate.
★★
Posted by The Bloody Pit of Horror at 1:16 PM