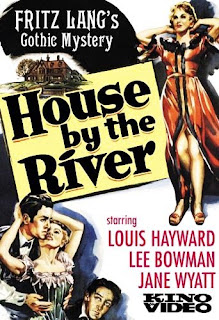 ...aka: Floodtide
...aka: Ghost of Rio, The
.
Directed by:
Fritz Lang
Frustrated, married writer Stephen Byrne (Louis Hayward) is feeling a little down in the dumps because his manuscripts have all been sent back by publishers. Looking for a little drunken pick-me-up while his wife is away, Stephen decides to come on to Emily (Dorothy Patrick), the attractive young maid they've recently hired. When he grabs Emily and kisses her, she screams and puts up a struggle. Stephen tries to silence her and ends up strangling her to death in the process. Immediately afterward, Stephen's crippled bookkeeper brother John (Lee Bowman) shows up and decides to go to the police. He's sick of covering for him, but is talked out of reporting it when Stephen claims his wife is pregnant. The two put the body in a sack and sink it in a nearby river (which has a well-earned reputation of recycling trash because of tidal water), and then try to go about their normal lives. While John is guilt-stricken over the events and finds his life falling apart because of it, brother Stephen is reveling in the attention he's getting in gossip circles and the local newspaper. In fact, he's getting enough free publicity to get his first novel published!
Several weeks later, the body turns up and John ends up being the brother taken to court and charged with murder since his name is stenciled on the sack that was used to hide Emily's body in. He's absolved of all wrongdoing, but the suspicion has ruined his reputation, friendships and career. Stephen however, who is sometimes haunted by visions of leaping fish he'd seen the night they sunk the body, is thriving and decides to relay the real-life events into a new novel he's writing titled "The River." Jane Wyatt co-stars as Stephen's long-suffering wife Marjorie, who eventually comes to the conclusion she's married a remorseless killer.
With such films as DESTINY (1921), DR. MABUSE, THE GAMBLER (1922), METROPOLIS (1927), M (1931) and THE TESTAMENT OF DR. MABUSE (1933) already long behind him, Lang had been having some trouble finding "respectable" big-budget studio work at this stage in his career. A studio he'd co-founded a few years earlier had went under and he, much to his displeasure, found himself at second rate Republic Pictures directing this. By Lang standards, this is just a minor footnote in a landmark career. However, by normal standards it's an above average and very entertaining film that blends melodrama, Gothic horror, courtroom drama and thriller together quite well. There's plenty of suspense, good performances and interesting and well thought out characterizations and character interactions. Though much takes place on sets, there are some nicely-done scenes that defy the anemic budget, such as Stephen frantically rowing around the edge of the river searching for the floating body.
Hayward (who would go on to play Jekyll and Hyde a year later in THE SON OF DRACULA) is great in his extremely unlikable role, and Wyatt and Bowman both also do nice jobs. There are a couple of nice supporting turns as well; one from Ann Shoemaker as a nosy but good-hearted neighbor who believes the Byrne brothers can do no wrong, and Jody Gilbert as John's hefty, talkative maid, who's getting fed up with her bosses irritable attitude. The cast also includes Peter Brocco as a coroner, Kathleen Freeman as a party guest and Carl Switzer (aka Alfalfa) as an office boy.
.
Filmed in 1949 (right after Lang's SECRET BEYOND THE DOOR...). It's been issued to DVD at least three times, including once from Kino and a two-disc edition from Wild Side Video.
★★★
Posted by The Bloody Pit of Horror at 7:12 PM

I was concerned about this one, having just seen Secret Beyond the Door. I couldn't get over how I was supposed to sympathize with the emotionally distant creep played by Redgrave, or the woman who marries him after knowing him for ten minutes. But I enjoyed House by the River, which succeeds by having actual sympathetic characters (I even felt sorry for John's maid).