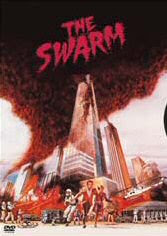 Directed by:
Irwin Allen
African killer bees are headed for downtown Houston and entomologist Michael Caine, immunologist Henry Fonda, female doctor (read: eventual Caine love interest) Katharine Ross and many others must put a stop to the pesky little bugs. In big numbers, the bees can bring down helicopters, but are eventually stopped when Caine finds a way to emulate the sound of them mating (?) The ultra-cheesy special effects are achieved by painting black dots on the film. It was a box-office flop (huge-for-the-time 21 million budget/10 million theatrical gross), critics hated it with a passion and it has an exceptionally talented ensemble cast giving the worst performances of their careers. Then again, how can you blame them with such badly written characters and horrendous dialogue? I'm sure many filmmakers would love to know how ole Irwin "master of disaster" Allen was able to always get together a Grade-A all-star cast for his Grade-Z dreck. Maybe handing out hefty paychecks?

Two-time Oscar winner Olivia de Havilland is a schoolteacher carrying on multiple affairs and is stung to death by bees for her amoral ways. Cameron Mitchell and Richard Widmark are both military men. Jose Ferrer is yet another doctor. Also here are Richard Chamberlain, Ben Johnson (involved in a misplaced romantic triangle subplot with de Havilland and former My Three Sons star Fred MacMurray... ick!) Lee Grant, Patty Duke, Slim Pickens, Bradford Dillman (who starred in the far cheaper, yet far more enjoyable PIRANHA the same year) and many others. It does offer quite a few huge unintentional laughs that make it worth a watch for camp addicts. And it actually managed to receive an Oscar nomination, for Costume Design of all things! There's also a plug for Allen's THE TOWERING INFERNO (1974) and two versions available; a 116 minute "theatrical" version and a 156 minute "expanded director's cut" version.

The ridiculous killer bee scare of the late 1970s (yet another example of media and government manipulation to distract people from whatever real problems happen to be going on in the world) spawned many similar projects, including THE SAVAGE BEES (1976), THE BEES (1978) and TERROR OUT OF THE SKY (1978).
Score: 2 out of 10
Posted by The Bloody Pit of Horror at 12:51 AM