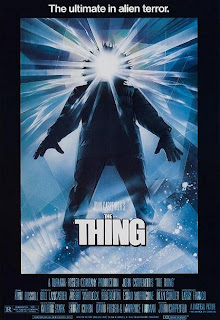 ... aka: John Carpenter's The Thing


Initially, most critics were not too kind to Carpenter's remake of the 1951 classic. I've pretty much drawn the conclusion the chilly reception had more to do with the big slasher flick movement going on in the early 80s than the film itself. So busy bashing "body count movies" on a weekly basis for their "senseless graphic violence," critics didn't seem comfortable with the increasing levels of blood and gore in mainstream films and felt even more uneasy that some of these films were becoming hits. They couldn't quite wrap their heads around the idea of violence for violence's sake, or violence for entertainment's sake. And they went on to arrogantly question the morals and values of anyone who actually enjoyed watching these kind of films. In the midst of the stalk-and-slash boom comes a remake of a beloved favorite that is even gorier and more violent than the slasher flicks critics had already spent several years berating. Acknowledging it as being the well-made movie it undoubtedly is would make them look like a bunch of hypocrites, right? Of course it would!
Being brushed off as "just another gore flick" by the press combined with a poorly chosen release date (it opened just a few weeks after the megahit E.T.: The Extra-Terrestrial [which would go on to become the highest-grossing film of all time] and on the same day as Blade Runner) led to it severely underperforming at the box office. But this particular tale has a very happy ending. In the thirty years since The Thing debuted, it has gone on to become one of the most popular and beloved horror films of all time. Some even consider it one of the greatest horror films ever made. I'm not quite that in love with it, but I do like it a lot.

A husky arrives at the United States National Science Institute 4 with a frantic Norwegian in a helicopter hot on its heels. After unsuccessfully trying to shoot the dog from above, the Norwegian accidentally blows up his helicopter with a grenade after he lands, then chases after and tries to shoot the animal. Instead, he accidentally guns down one of the Americans and is immediately shot dead before they're able to acquire any information from him. Why was he going to such lengths to hunt down and kill a harmless dog, and what drove him to the brink of madness to begin with? That's what Dr. Copper (Richard A. Dysart) wants to find out. He has scruffy, hard-drinking pilot R.J. MacReady (Kurt Russell) fly him over to the Norwegian outpost. There, they discover the base camp in complete disarray and all of its inhabitants dead. Inside, there's a block of ice where something large had been removed but whatever it was is nowhere to be found. Outside in a fire pit there's a large, unidentifiable lump of various human matter (hands, heads, bones) all twisted and burned almost beyond recognition. Copper and MacReady take whatever it is - as well as some papers, photographs and videos from the camp - back to their station and have Dr. Blair (Wilford Brimley, in a role originally intended for Donald Pleasence) begin an autopsy.

One of the videos - fashioned in tribute the original film - reveals that the Norwegians had uncovered a space ship buried under the ice that's been lying dormant there possibly for hundreds of thousands of years. The alien specimen they removed from the site is the same thing that managed to completely descimate their camp. The husky dog that escaped to the U.S. installation from the Norwegian one is put with the other dogs and ends up mutating into a tentacled monster. Gunshots do no good in taking it down, but it doesn't take long to discover its weakness is fire. Dr. Blair's research into the blood of the organism reveals that it's equipped with special cells that intrude and assimilate into the cells of other living beings. In other words, the alien can digest and absorb whatever living being it chooses, and then imitate them perfectly in both look and demeanor. Since the dog has already been in their camp for a day, the problem arises about who - if anyone - has already been infected. And if the being can somehow make it out of Antarctica and into the civilized world, it is projected to completely take over in just 27,000 hours time.

Things quickly get out of hand for MacReady and company as people start dying, mutating and / or infecting the others. To make matters even worse, Dr. Blair goes crazy and smashes all of the helicopters and radios, so there's no escaping and no calling for help. Everyone will be stuck there in the frigid, remote camp whether they like it or not until Spring. And no one knows who - if anyone - they can trust. A blood test is eventually devised to weed out who's already infected but by that point, with several people already missing, it might be too late.

Not concerned much with character development or any kind of "message," and tossing subtlety to the wind, Carpenter's take on John W. Campbell's "Who Goes There?" is a back-to-basics thrill ride concentrating primarily on action and Rob Bottin's impressive, elaborate and highly inventive special effects, which have withstood the test of time brilliantly and continue to impress to this day. There are lots of memorably gory moments to be found in this one. Dogs and humans split open and mutate, a head stretches, rips off, sprouts legs and antennae and turns into a little spider-like monster and a stomach suddenly opens to reveal razor teeth which bite the hands off a doctor trying to use a defibrillator. And there's a lot more where that comes from!
Aside from all of the great fx work, the are also notable contributions from cinematographer Dean Cundey, composer Ennio Morricone and production designer John J. Lloyd. The Alaska and British Columbia filming locations work just fine for the exteriors of Antarctica (interiors were filmed on an air conditioned set in Los Angeles). The actors are all adequate playing one-dimensional characters. Much like Jaws, this is essentially a popcorn flick, but it's very well done for what it is.

Christian Nyby, credited director of the original Thing, publicly denounced the film in interviews. Carpenter however has stated that his first major studio work - which received a healthy 10 million dollar budget - is the favorite of all his work. Because Bottin was overextended and suffering from exhaustion working on the project, Stan Winston was brought it to create the dog fx. The all-male cast includes Keith David (who'd go on to appear in Carpenter's THEY LIVE), Donald Moffat, T.K. Carter, Charles Hallahan, Thomas G. Waites, Norbert Weisser and associate producer Larry J. Franco. Adrienne Barbeau (who was married to Carpenter at the time) contributes an unbilled voice cameo as a computer.

Well-serviced over the years by Universal, this has seen multiple VHS and DVD releases, was made available on bluray in 2008 and still enjoys frequent runs on television.

"The Thing" is the only movie I have actually jumped in sheer terror. I have seen more horror movies than I care to remember, but this film is truly frightening.

The only movies in recent years to match it has been "Ringu" and [.REC].

It is a shame, there have been no other comments, but take it from me, horror buffs need to see this masterpiece.

It's been years so I definitely need to rewatch it. The blood test scene is the one scene I remember the most.