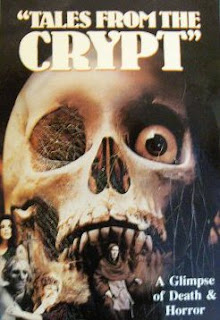 I've seen very few horror anthologies where all of the segments are consistently good, and this quintet of terror tales from Amicus is no exception. Of the five stories presented, three are fairly successful, while the other two seem somewhat poor by comparison. They're all based on the old EC comics Tales from the Crypt and The Vault of Horror, which would later be the basis for both Romero's CREEPSHOW and a long-running HBO television series of the same name, which ran from continues to play in syndication to this day. Attending what they believe to be a tour of some underground catacombs, five people find themselves separated from the group and tour guide (Geoffrey Bayldon) and then trapped in a room where a cloaked mystery man (Sir Ralph Richardson, in monk attire, as The Crypt Keeper) has them reflect on the last thing they remember before arriving there...
It's Christmas Eve in "All Through the House," as icy wife Joanne Clayton (Joan Collins) knocks off her wealthy husband so she can collect on his insurance. While cleaning up the blood and hurridly trying to arrange the body to make the murder look like an accident, she's paid a visit by an unexpected visitor - a mental home escapee dressed like Santa Claus! This segment is a little too short in length, but it's tense and suspenseful, with several good jolts provided. It's also the first film I can recall that has a killer dressed like Kris Kringle, which would later be copied by such films as TO ALL A GOODNIGHT and the first three SILENT NIGHT, DEADLY NIGHT films. Overall, well done.
Tale #2 ("Reflection of Death"), one of the duds, features unfaithful family man Carl Maitland (Ian Hendry) plotting to abandon his family for his young mistress Susan (Angela Grant). Before Maitland and Susan can get too far, they're involved in a car crash. Carl decides to walk back home to the comfort of his wife and children. Unfortunately, any person he encounters on his trip back home recoils in fear, and Carl doesn't know why until he catches a reflection of himself. This story feels rushed and predictable and it's not particularly effective. They'd have been better off scrapping it altogether and applying the time instead to the first and fourth tales, which could have used a little fleshing out.
Smack dab in the middle is "Poetic Justice," the story of upper class jerk James Elliott (Robin Phillips), who uses some rather cruel tactics to drive kind, but eccentric, Arthur Grimsdyke (Peter Cushing) out of his neighborhood, because he feels his presence is decreasing the property value. Arthur lives for his beloved dogs and for fixing up old toys to give to the local kiddies, who all seem to fancy him. James lies and manipulates to ensure Arthur loses both his dogs and the companionship of the neighborhood children, then sends out some mean-spirited Valentine's Day cards that are so hurtful they push the already depressed Arthur to suicide. Naturally, heartless James eventually gets what he has coming to him. Though the resolution is predictable, the dramatic component is solid thanks to Cushing's moving and sympathetic performance, which helps to ensure that we actually care about what's going on. It also proves that Cushing's talent could have, and should have, been better utilized during his career.
Next up is the Monkey's Paw-derived "Wish You Were Here," which is another of the weaker moments in the film. Ralph Jason (Richard Greene) and his wife Enid (Barbara Murray) discuss an Oriental statue, which he claims can grant up to three wishes. She jokingly wishes for wealth. He dies in a car crash and thus she inherits money. Guilt-stricken, Enid wishes that her husband would return to her. He does, but unfortunately has already been embalmed! She's still got one more wish left. What should she do? The only shocker in this flat segment is a surprisingly gory moment. Otherwise it's forgettable. I've already seen this same story before, done much better elsewhere. With Roy Dotrice.
And finally, "Poetic Justice," which in my opinion is the best of the stories. Sadistic former army major William Rogers (Nigel Patrick) is put in charge of a home for blind men and starts running it like boot camp, denying the frail tenants adequate heating, blankets and decent food. He seems more interested in using his alloted money indulging himself and his pet dog than he does tending to the needs of those put into his care. This results in one of the blind men getting sick and dying, which leads George Carter (Patrick Magee) to rally his brothers together to get revenge. All-around, very well done. It's well written and well acted, and doesn't feel rushed and half-assed like some of the other stories. Memorable finale, as well.
The film ends with a predictable fiery resolution for the five trapped tourists.