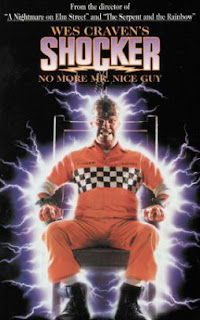 
Obviously writer / director Craven was trying to make another Nightmare on Elm Street-type series with this lame supernatural slasher, but this concept just didn't cut it with audiences. Serial killer Horace Pinker (Mitch Pileggi, who's good considering) is executed in the electric chair. His spirit carries on into electric currents where he can move from TVs and power outlets into people so he can kill again. Peter Berg (alternating smug facial expressions with ones of complete indifference) stars as the thoroughly unlikable / unsympathetic teen football jock hero who is plagued by nightmares starring Mr. Pinker and is out for revenge when both his girlfriend (Cami Cooper) and his mother become victims. Helping Berg, is his policeman stepfather (top-billed Michael Murphy). Also helping Berg, in scenes too idiotic for words, is Cooper's character, who returns as a transparent white ghost and can hurt the seemingly indestructible killer by shooting a white light out of her stomach (!?!) When Pinker enters TV sets we also get some parodies of television shows, including an Entertainment Tonight gag featuring John Tesh and a televangelist show with Dr. Timothy Leary. The top-notch-for-the-time special effects and outstanding make-up provide the sole point of entertainment and a few bits boast creativity, but for the most part this is loud, idiotic and obnoxious.

Director Craven (who has done much, much better) has a cameo as a neighbor, as does original Elm Street heroine Heather Langenkamp, who can be seen on a stretcher. Also with Sam Scarber, Richard Brooks, Ted Raimi, Christopher Kriesa, Ernie Lively and Brent Spiner. Craven's next movie was The People Under the Stairs. Soundtrack features Megadeath's cover of "No More Mr. Nice Guy" and a video that was shown in regular rotation on MTV. Ghost in the Machine (1993) copied some of the ideas here.

not on the IMDB trivia page: before it was retooled as a feature, SHOCKER was meant to be a weekly TV show called THE DREAM STALKER.