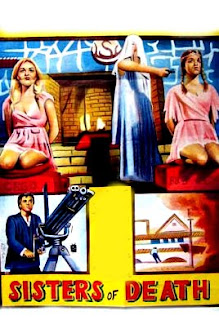 Directed by:
Joseph A. Mazzuca
In Paso Robles, California, an innocent initiation rite turns to tragedy when a sorority pledge is slipped a real bullet during a bogus game of Russian roulette. Seven years later, the survivors (headed by the stunning Claudia Jennings - 1970 Playboy Playmate of the Year - as a successful fashion model) are all invited back to the town for a reunion get-together at a remote mansion surrounded by an electric fence. Turns out the father of the dead girl (Arthur Franz) has lured them there for revenge. He hides out in the attic playing the flute, makes his own bullets, sneaks around the house in secret passageways, spies on them through vents, tries to scare them with a tarantula, rattlesnake and dog and then proceeds to pick them all off one by one. There’s also a secret ally amongst the girls, who is helping him. Though tame (there’s little violence, no nudity and a PG-rating), this is still a pretty fun, fast-paced and well-made low-budget thriller, with OK acting and plenty of tacky 1970s stylistics. The ending, however, is pretty stupid. The cast includes Cheri Howell (BLOODY FRIDAY), Sherry Boucher, Paul Carr (THE BAT PEOPLE), Joe E. Tata (who went on to play the diner owner on the TV show Beverly Hills 90210) and Sherry Alberoni (BARN OF THE NAKED DEAD). It wasn't actually released until 1978.
Score: 5 out of 10
Posted by The Bloody Pit of Horror at 1:00 AM