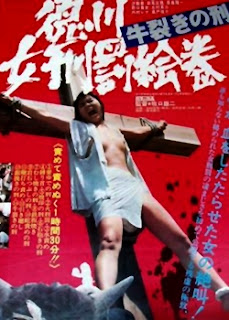 
The subtitle itself should clue you in to what kind of film this follow-up to 1968's THE JOY OF TORTURE (1968) is: a cash in. "Oxen Split Torturing" alludes to one of the more gruesome moments in the original film, where a woman is tied to two oxen and pulled apart and that's the kind of gross out this film wallows in. While the first had a distinct point of view and worked its various tortures into the message it was trying to convey, this one goes the exploitation route while feigning being a message movie. Mean-spirited, tasteless and very, very nasty, this isn't made with anywhere near the skill Teruo Ishii's original was, has continuity issues galore, some major overacting and ill-conceived attempts at comedy. Things open with black-and-white "mondo" stills of real dead or dying people (charred corpses, Holocaust victims, etc.) to make us start feeling icky right out of the gate, a quote to feed us the supposed moral of the story (" 'The weak become the victim of the strong' is a rule of mankind") and then three brief faked executions (a woman dunked in boiling water, a man hung and then cut in two and a woman burned at the stake). Unlike the first film, which was divided into three stories with linking segments, this is just two stories.

Our first tale is set in Nagasaki in 1628. Handsome young samurai Iori (Yûsuke Kazato) is bitten by a snake and a young beauty named Toyo (Rena Uchimura) comes to the rescue and sucks out the venom, then invites him back to her families home to recover. Meanwhile, in the main village, a sadistic, corrupt Lord is busy having people branded to try to get them to renounce their Christian faith. Since this doesn't work and he's bored watching it, he instructs one of his men to create new, more effective and more entertaining tortures for his to cackle at. And that he does! A woman is put in a large aquarium and has dozens of poisonous snakes dumped on her, a man has his foot crushed by a giant mallet and another is cooked alive in a giant pot. To quickly move up the ladder in the village, Iori allows a cross to be planted on Toyo's families farm and then becomes the Lord's personal assistant. The virginal Toyo is brought in and tied up. The Lord informs her "You will soon forget your God and cling to me like a bitch!" before raping her and making her become his concubine. He then tries to force her to out other Christians in the area. Since this film is so poorly structed (or possibly because the English subs are poorly done), it's never quite clear whether Toyo or anyone else for that matter really are Christian or if it's all just an excuse for the Lord to get his warped jollies.

Toyo basically goes through hell while Iori sits around pouting in shame. Toyo's kid sister is beat over the head with a cane and then has her eyes burnt out with a fire poker before being thrown out of the village. Toyo's parents are tied to crosses, speared and then burned alive right in front of their daughter. Immediately afterward, the Lord rapes Toyo again and she has her very first orgasm. Hey, I told you this was sick. Iori has his samurai status stripped away and is banished from the kingdom for refusing to cooperate with the Lord. A year passes, Iori returns to rescue Toyo but they are captured again. He's filled full of aarows and speared and she gets ripped apart by bulls. The narrator then tries to inject some irony into the proceedings by informing us that later the evil Lord (who actually eats live lizards on screen) got promoted to feudal lord and then became the "Minister of Religion."

The second portion (set in Fukagawa Edo in 1821) is an incredibly stupid tale which centers are a whorehouse and (I think) is supposed to be funny. Sutezo (Takuzô Kawatani), a loud, extremely obnoxious pathological liar who claims to be from a rich family but isn't, runs up a bill on boarding, booze, food and prostitutes that he cannot pay. For punishment, the owner of the whorehouse forces him to work there for an entire year. We then get to see the various trials and tribulations of the hookers. When one of them steals another's customer the girls hold her down, cover her with some gunk and let a bunch of dogs lick it off... and the "victim" seems to enjoy every second of it. Another hooker named Tami gets pregnant and for punishment a bunch of men kick and knee her in the crotch and then an old woman fists her and yanks the fetus out (!!!) She's then forced to go back to work and almost dies. With help from one of the men, she tries to help her escape but the two are captured, tortured and killed. His new boss even makes Sutezo cut off the man's dick (after forcing him to eat his ear).

Sick and tired of the abuse, Sutezo and his favorite of the girls - Sato (Maki Tachibana), a gluttonous eater and none-too-bright it seems, run away and find their life of crime on the outside just as harsh. They concoct a scam to sell Sato to other local brothels but run off after she's sold... even if that means wading through a pit of shit and getting pissed on to get out. After a fight, Sato goes off on her own and gets gang raped by a bunch of dirty beggars. Sutezo kills them and then the two find themselves on the run from the law. They're captured by the authorities, tied up back to back, beat with bamboo poles and subjected to various other tortures including getting toes chopped off, nipples ripped off and being tied to a water wheel. Eventually they're put in a rack in the public square with a saw placed near their heads. Anyone in the village can decapitate them if they so choose to, but Sato is spared decapitation in favor of life as a concubine. The end.

Loaded with gore, misery, screaming, torture, nudity, rape and sex (though any thrusting - clothed or not - is fogged out on the version I saw), this has a healthy budget and is more tasteless and "extreme" than many better known American or European counterparts from the same time. That in itself doesn't exactly make this better per se, but it's sick and mean enough to possibly attract a larger audience than the first film. I found a major tonal issue here, though. Much of the time it's cartoonish and over-the-top, but then it'll whip out the dramatic music in an ill-fated attempt to try to make us care or sympathize with the undeveloped cardboard cutouts contained within.

The DVD is from Japan Shock.