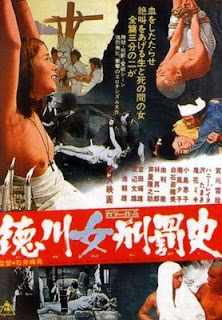 
You know this episodic Toei Production means business when the opening credits include a decapitation, a body sliced in two, a burning at the stake and a woman being tied spread eagle in front of a pole and pulled apart by two by oxen! This is very graphic and adult oriented material for its time in more ways than one: ballsy, button pushing stuff really. There's no way in hell the images contained in this mainstream film would escape past the censors in America or many other countries during its era. And I'm not just talking about the violence, gore and frequent nudity on display. I'm talking about depictions of a brother and sister passionately kissing, a man raping a virgin in front of her dying brother, a tight close up of lesbian nuns making out, nuns and priests going down on each other and more. It's also funny how something over forty years old can completely bury more modern "torture porn" crap not only when it comes to substance, artistry, performance and overall production values, but also in its actual depictions of on-screen torture, suffering and bloodletting. This isn't a "joy" to watch, but it's not meant to be. It's basically a condemnation of cruelty, torture and capital punishment of anyone - "deserving" by current law or not - at the hands of their "superiors."

The first tale is set in a small farming village, where Shinza is seriously injured after a tree hits him in the head. Wealthy village master Mino arranges for a doctor the family cannot afford to help him recover. Why so generous? Because he wants Shinza's beautiful younger sister Mitsu to become one of his mistresses. Because their parents are dead, her brother is laid up for months and Shinza's odd jobs aren't quite cutting it, she finally gives in to the master so he can continue to pay for the doctor. When her brother catches word, he confesses his love to his sister and the two end up becoming much more acquainted than any siblings should. Mino finds out about the incest and, knowing it's punishable by death in their village, decides to blackmail Mitsu. After raping her in front of her brother/ lover, a shamed Shinza commits suicide. Mitsu lashes out against Mino and slices him up, then is apprehended. What follows is plenty of torture as the village elders decide to try to beat a confession out of Mitsu. She finally confesses to the incest and ends up tied to an upside cross and left to slowly drown for punishment.

Next up is a sensuous and bloody tale of lust, jealousy and corrupt heirarchy set in a sheltered religious convent in 1666. New abbess Mother Reiho is sent to a secluded nunnery from the head convent (where all the nuns shave their heads), along with her servant Rintoku, who's also her lover. Reiho is told early on that the nuns don't fraternize with the priests who live at the nearby Juko temple. She happens to catch sight of priest Shunkai having a secret rendezvous with a nun named Myoshin and uses this against the priest to get him to make love to her (under a waterfall). When her desire for future liasons are denied, she uses her high position in the convent pecking order to enact some grueling tortures against Myoshin in hopes she or Shunkai will give up on their relationship. Poor Myoshin is terrorized with leeches, being tied upside down and spun around and then having her private area stuffed full of red pepper and then branded with a hot poker. This segment has a bloody decapitation, concludes with crazed nuns being gored to death on crosses and ultimately asks the question whether or not it's immoral to put the mentally ill to death.

Our final tale - set in 1671 - centers around prideful tattoo artist Horicho, who fancies himself the best in his field. When the powerful and ruthless Lord Nambara criticizes his work, Horicho becomes obsessed with perfecting his craft. He spots Hana, a young virgin with fair skin at a local bath, then kidnaps her, drugs her and tattoos her private parts to ensure that no man will want her and she'll be his obedient slave. Now with a blank canvas at his disposal, Horicho needs to learn the true meaning of agony to improve upon his drawings. The Lord invites him to the magistrate's office to bear witness to their most cruel tortures. They've gathered up a group of caucasian female Christian missionaries (!) who are whipped, lead around on leashes, have huge stones placed on their laps, burnt with fire and candlewax, drunked under water, put in a rack, you name it. Horicho watches it all unfold while working on tattooing Hana's entire body with ugly scenes are torment and torture.

Bleak, depressing, grueling and sometimes even a bit tedious to sit through, Joy of Torture is pretty much laid out just like a warped research paper, starting with a thesis statement and then using its individual stories to further illustrate its main point. Though structured completely differently, it can be seen as a precursor to stuff like Pasolini's SALO, MEN BEHIND THE SUN or any number of later Nazi death camp or torture flicks. The acting, art direction, production values, makeup, photography and editing are all very, very good.

First distributed on VHS by Video Screams, it's now available on DVD through Japan Shock. It was followed by at least one follow-up: THE JOY OF TORTURE 2: OXEN SPLIT TORTURE (1976) as well as some unofficial ones (including director Ishii's INFERNO OF TORTURE [1969]).