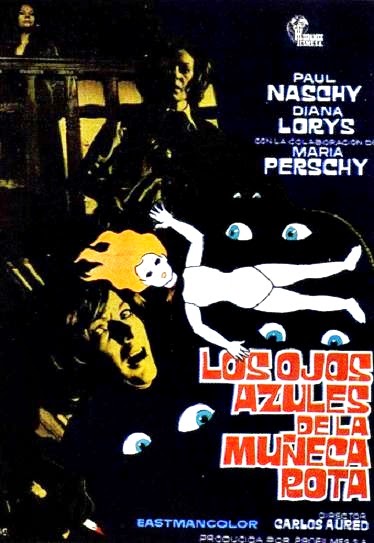 
Out-of-work drifter Gilles (Paul Naschy), an ex-con haunted by visions of strangling women, hitchhikes his way to a small French village called Perrouze. He runs into a mysterious woman with a crippled hand named Claude (Diana Lorys) who claims she and her two sisters are looking to hire a handyman and groundskeeper to do odd jobs at their large, secluded country home. Gilles takes Claude up on the offer, is introduced to the sisters; youngest Nicole (Eva León) and eldest Ivette (Maria Perschy), and gets to work milking cows, chopping firewood and tending to the yard. Everyone in the home seems to have their issues. Ivette is paranoid someone's trying to poison her, is still pining for a man she lost many years earlier and is confined to a wheelchair (possibly due to psychosomatic reasons), Claude is sexually repressed, bitter about her mangled arm and seems jealous of younger sister Nicole, who's something of a nymphomaniac and claims her siblings are forbidding her to leave the home. It seems like Dr. Labor (Eduardo Calvo) and his nurse Michelle (Inés Morales) have their work cut out for them tending to this lot.

It isn't long before the plot complications starting piling up. Nicole seduces Gilles. Gilles seduces Claude. Nicole tries to seduce the doctor. Out of nowhere, a man named Jean (who may be one of Nicole's disgruntled former lovers) attacks Gilles with a knife. Michelle might not be who she claims to be. Gillies definitely isn't who he claims to be. He's actually Alain Dupre, a convicted rapist who tried to strangle a woman and is still fighting off homicidal urges. Meanwhile, a serial killer is running around killing blue-eyed blondes and removing their eyeballs. Just when you think you've got it figured out and all will be revealing during a police pursuit around some snow-covered mountains, the film then begins plot twist mode as several of the suspected killers are offed in quick succession until we come to the out-of-left field resolution.

This complicated horror-mystery is often classed as a giallo. While there are similarities between it and the more popular Italian entries from this time (namely a black-gloved killer and lots of twists near the conclusion), there are also quite a few differences. For starters, it's not nearly as stylish as some of its Italian counterparts. Aside from Gilles's strangulation fantasties, often set to misty, all-white or all-red backdrops, the film may disappoint those looking for more stylish set-ups and elaborate camerawork. Secondly, the film (thankfully) doesn't waste too much time delving into any typically dull and woefully redundant police investigation, which is something I consider a blight to the subgenre and something that keeps the majority of these films from rising above mediocrity. Instead of the cop nonsense, here we get an array of more interesting and better-defined characters, which is certainly a good thing. Naschy and the director (who co-wrote the film together) at least deserve credit for that, even though they let the film get away from them during the final twenty minutes. It's still an involving, entertaining effort with decent acting and better English dubbing than usual.

The original cut U.S. theatrical release title was House of Psychotic Women; a print and moniker retained for most of the VHS prints. What I watched was the original European version (released on the Dutch Midnight Video label), which contains nudity and gore, though actually not a whole lot of either. It does however feature a completely pointless insert scene of a farm family tying up a pig, killing it, slitting its throat and then collecting the blood in a bucket, which serves no purpose other than cheaply attempting to up the shock value. The 2008 DVD release from BCI/Deimos is uncut (and supposedly the best looking print available).

The cast includes Antonio Pica as the obligatory inspector (though as previously mentioned, he's relegated to the sidelines until the end), Pilar Bardem as a gossipy barmaid, Luis Ciges as a drunk and Sandra Mozarowsky. Aured and Naschy also teamed up to make CURSE OF THE DEVIL (1973), HORROR RISE FROM THE TOMB (1973) and THE MUMMY'S REVENGE (1973).

I always liked the HOUSE OF PSYCHOTIC WOMEN title better. I am, to put it mildly, not a fan of gialli, but I rather liked this Spanish attempt to copy one. It leaves part of the mystery unsolved, though--who did the stabbing near the end? No one ever notices, though, because the ending is so well-played.

Yeah, I like "House of Psychotic Women" better as the title too, plus the poster art is cooler than what I used here. I might do a switcheroo on that.

I really liked the first hour a lot but then it became a bit too convoluted for my tastes. It did the whole "No... THIS person is the killer!" routine about four times and I was like "Gah!"

Are you talking about who stabs Maria Perschy's character? If so, I assumed it was the doctor. There's a quick flashback that shows him in her home hypnotizing her with his pocket watch right before she attacks Michelle. I think they only showed his hand in the version I watching. If you're talking about someone else, I may have missing something. Wouldn't be the first time.

What confused me is that I didn't understand who was buried under the rock pile. At the end a woman is leaning on it, some rocks roll off and there's a female hand sticking out. Just an anonymous victim?

And do you happen to know the name of the song used during most of the horror scenes? I was pulling my hair out trying to think of it. It's an instrumental version and I think some of the lyrics are "Parlez-Vous, Parlez-Vous." I think it might be a children's song.

The song is Frère Jacques and the refrain is "Dormez-vous? Dormez-vous?" (are you sleeping?). A sweet tune but rather insidious once it's inside your head