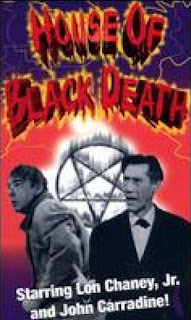 ...aka: Blood of the Man Beast
...aka: Blood of the Man Devil
...aka: House of Black Death
...aka: Night of the Beast, The
...aka: Widderburn Terror, The
Directed by:
Harold Daniels
Reginald Le Borg
Jerry Warren (uncredited)
Utterly awful, endlessly talky mess based on Lora Crozetti's novel The Widderburn Horror, consists of footage shot by three different directors at three different times. The bulk of the movie was shot by Harold Daniels (TERROR IN THE HAUNTED HOUSE), who receives sole directorial credit here. Reginald Le Borg receives a second unti director credit, most likely for shooting some pick-up footage, and brand new scenes featuring a witch, a warlock and a female cultist sitting around discussing what’s going on were added by Jerry Warren. Apparently Warren was asked to salvage what had already been shot and just did his usual routine of filming people sitting around talking.
Opening narration informs us about the cursed Desard family of the small village of Widderburn and how each of the four surviving members are condemned to hell regardless of their Earthly intentions. Actually deserving his spot in Hades is evil, cloaked warlock Belial Desard (Lon Chaney, Jr.), a faithful Satanist who was driven out of ancestral home by his terminally ill “black magician” brother Andre (John Carradine), who hordes the family wealth and tries to keep Belial and his hooded cult away from his home (and away from a sacred book of spells). Paul Desard (Tom Drake) has lost the use of his arm thanks to a wolf attack and may change into a werewolf during an upcoming full moon. Valerie Desard (Dolores Faith), born of a witch, wants to live a normal life but can’t because of her cursed heritage. The estate comes equipped with a special room where members of family are placed once the “curse of insanity” kicks in. A pair of doctors, Dr. Eric Campion (Jerome Thor), who’s been in love with Valerie for years, and skeptical psychiatrist Dr. Kate Mallory (Andrea King), show up to try to help the feeble Andre and end up getting in the middle of things.

Aside from lots of incredibly boring sequences where characters sit around on cheap looking sets discussing things, about ten minutes are set aside from five different Satanic dances (three of which are performed by large-breasted blonde Sabrina dressed in a bikini top and loincloth). At least another ten to fifteen minutes are swallowed up by the new Warren footage, which features his then-wife Katherine Victor as a witch named Lila. That footage is little more than dull Satanic chants, more dancing and characters sitting around redundantly recapping what's going on. A dog is killed (offscreen), we get one very brief shot of a werewolf face and there’s finally an attempt at a human sacrifice at the very end. Chaney’s character sports a pair of horns under his hood and supposedly has cloven hooves instead of feet (which we never even get to see).

Not released until the mid-1970s, this was eventually sold to TV where it became a late night cable staple for awhile. It's not on DVD and not really worth the effort to track down (even for die-hard fans of Chaney and Carradine), but Sinister Cinema offers it on video under the title BLOOD OF THE MAN DEVIL if you're a masochist. Brianne Murphy (who’d go on to direct BLOOD SABBATH and become an award-winning cinematographer) was the script girl. The run-time (despite what some sources say) is 74 minutes.
★
Posted by The Bloody Pit of Horror at 1:53 AM

Ha! I never knew Warren had anything do to with this but I always thought it looked like he could have!

And how funny is it that someone intentionally hired Warren to try to FIX a movie? I take it they never saw any of his previous work! :)