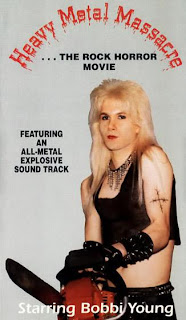 Directed by:
David DeFalco
One of the funniest North American horror subgenres of the ‘80s is certainly the heavy metal horror flick. Like any other trend, these things – with their ear-splitting hair metal soundtracks and big-haired, leather-and-spandex-clad, hideously made-up actors - were completely out of date just a few years after they were made, but now stand as hilarious testaments to extreme 80s tackiness. Things were kick started in the early 1980s with several releases hoping to cash in. Some of the earliest releases were HARD ROCK ZOMBIES (which was filmed in 1983 but not released until 1985), MONSTER DOG (1984; starring Alice Cooper) and ROCKTOBER BLOOD (1984), but it wouldn't be until 1986’s TRICK OR TREAT (featuring cameos from Gene Simmons and Ozzy Osborne) became a big video hit that these things started coming out in droves. Others in this subcategory include ROCK N’ ROLL NIGHTMARE (1987), SLAUGHTERHOUSE ROCK (1987), BLACK ROSES (1988), DEAD GIRLS (1989), HARD ROCK NIGHTMARE (1989) and SHOCK ’EM DEAD (1990). There are probably some others I'm forgetting, but this may actually be the rarest (and cheapest) of them all.

Shot-with-a-camcorder around Providence, Rhode Island, HMM doesn’t seem to have made it to many video stores across the nation during its day and was likely self-distributed locally. The label listed on the video box is “Valiant Video,” a company who don’t seem to have released any other film. It was the first taste anyone ever got of David De Falco, who produced and did set design under his real name but wrote, directed and starred under the alias “Bobbi Young.” He is probably also a member of The Electric After Burner Band, who contributed some of the God awful metal songs to the soundtrack. The whole thing is little more than an embarrassing vanity production. De Falco would become a bit more famous later on in his career by becoming a muscle-bound, shameless self-promoter who behaved like a basket case (claiming he was a demon and the master of violence) while promoting his “torture porn” CHAOS (2005). Judging by the evidence here, the guy’s more recent behavior is nothing new. He’s always been completely full of himself. HMM is full of still photos and loving close-ups of Mr. De Falco trying to look cool with his leather outfits, huge teased blonde hair, mascara and pink lipstick. And naturally every big haired chick in this film seems to want his scrawny little bod.

De Falco – sorry, “Bobbi Young” – plays a coke-snorting psycho (billed only as “The Killer”) who lures young women and hookers who hang out at “The Dungeon” club back to his warehouse-sized apartment and murders them. Detective Reece (Nick Hasomeris) and his partner Bruno (John Thayer) investigate, and a girl named Shauna (Michele De Santis), her drug-addicted roommate Lisa (Sami Plotkin) and a very strange-looking drug dealer named Ace (“Pre-Teen” Steve Murphy) all become involved. The first victim is tied to a flat and hit in the stomach and over the head with a rubber sledge hammer. Next, a girl is drugged, tied up and has something that looks like a hair pulled out of her mouth with some pliers. A bully dressed as a greaser gets chainsawed and some other girl gets covered with a sheet and hammered over the head. The end. Most of the murders are done in fake slow-motion to try to cover up the fact the victims are likely just getting tapped with whatever rubber weapon “Bobbi” is heaving at them.

What could have been hilarious, is instead cheap, slow, dragged-out and boring. The opening credits themselves last over five minutes, with the camera slowwwwly panning around a room, going out of focus and doing a cheap strobe effect. The movie is filled with repeat shots, slow-motion shots, the same shots shown over again with cheap video fx (like different colors, rippling and blood dripping) and unbroken shots that last for minutes at a time and never seem to end. They didn’t even have enough material here for a 20-minute short, let alone an 84-minute film. The cast is boring, the music is shitty (even by the low standards of the time) and there’s not even any decent gore.
NO STARS!
Posted by The Bloody Pit of Horror at 3:07 AM

Lol! Despite no starsI'm slightly intrigued by this nonsense!

The video box is unfortunately the funniest thing about it!

Yeah, it's definitely one of the worst I own, too. I want to beat the DVD with a sledgehammer...

found a copy of this at a thrift store once. it's one of the worst movies i've ever seen. not even in a good way.

Best movie ever... and has metal on the sondtrack!!!