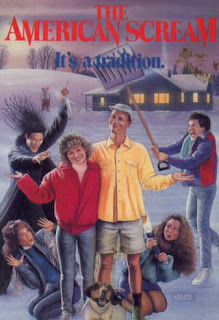 
You’d be hard pressed to find a horror-comedy that misfires as badly as this one. Goofball dad Ben Benzinger (Pons Maar, who looks and acts a lot like Matt Frewer) and family head up to a rented cabin at a small, wintery town called Wilson Creek. Coming along are his hair-obsessed, airhead wife Barbara (Jennifer Darling), rocker Peeping Tom teenage son Brent (Matt Borlenghi, channeling 21 Jump Street era Johnny Depp), virginal teen daughter Bridgett (Kimberlee Kramer) and two of the kids’ friends; Larry (Kevin Kaye) and Roxanne (Jeanne Sapienza). On the way there the teens spot a killer clown standing on the roadside, then look into a passing car to see a man murdering an infant because he’s jealous his wife is breast-feeding it (!) Meanwhile, the parents sing 100 Bottles of Beer. They all reach their destination (you know, forgetting to inform the authorities or any of that), then head off to town to a diner where the weird townspeople all stare intensely and behave strangely.

At their cabin, Larry sees a priest (Blackie Dammett) trying to murder a young woman. That night when they attend a Polka Dance, Brent is accosted in the bathroom by a pervert who wants to watch him piss and the girls see a man getting decapitated. A country bumpkin with a stuffed pet dog (George “Buck” Flower) relates a flashback to when his children were killed before getting shot in the head. So, it’s time to leave, no? Guess not. They all just stick around and act as if nothing’s happened from one scene to the next. Hell, they even help hide a dead body that someone else kills at one point. Why? I have absolutely no clue. More weird stuff happens (a couple eat a baby, a dead body turns up in the shower, etc.) and it’s eventually revealed that the people in the town hate children and teenagers and, for whatever reason, want to either kill them or force them to grow up so they become part of the town.
.
I know horror movie teenagers aren’t known for using common sense, but the fact none of the teens ever attempts to leave is extremely irritating throughout. Even when it’s established that they may have been lured there by their own parents to be killed, they don’t leave. Even with frequent access to transportation they just stay there waiting to get killed. Not only are the characters obnoxious, annoying and stupid, but the tone of the entire film is highly inconsistent. Neither the comedy nor the horror works, the scenes transitions are awful and the supernatural aspects to the story are barely even established. T&A is provided by at least four different women, including Edy Williams as a stripper, if that's a plus in your book. Bill Johnson (THE TEXAS CHAINSAW MASSACRE PART 2), Linda Honeyman (MEMORIAL VALLEY MASSACRE) and Debra Lamb (EVIL SPIRITS) also have small roles. Don’t bother.

I've (thankfully) managed to rid my mind completely of this one but I do remember debating whether to give this 1 or 0 stars.