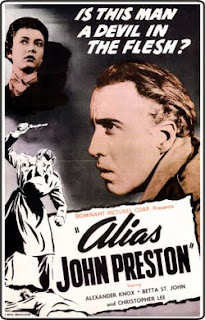 Nothing surprising ever seems to happen in the sleepy little town of Deanbridge. Dick Sanford (John Longden) is the successful local banker whose pretty daughter Sally (Betta St. John) is reluctantly dating well-intentioned but immature and goofy amateur gold champ Bob Newton (Peter Grant), who works at the bank for Dick and is the son of bored newspaper editor Joe (Bill Fraser). Everything’s pretty ho-hum until one day wealthy, shrewd and mysterious businessman and entrepreneur John Preston (Christopher Lee) shows up in town. Within just a few months, Preston seems to be purchasing up major real estate in the area, plans to reinvigorate the town’s dying synthetics industry and becomes a trusted member of the community and member of the city counsel. Sally also seems drawn to the mature, ambitious, cultured new man in town, It isn’t long before the two of them become engaged, much to the dismay of Bob, who’s been in love with Sally ever since they were children. But things take a bizarre turn upon the arrival of psychoanalyst Dr. Peter Walton (Alexander Knox).

Preston, who initially voted against hiring Dr. Walton, quickly becomes a regular patient of his; complaining of horrible nightmares that are keeping him from sleeping. In them, Preston has a completely different identity - David Garrity - and has recently murdered his blackmailing mistress Sylvia (Sandra Dorne), whom he buried in a shallow grave in his back yard with help from his dead lover’s husband (Patrick Holt). Are these simply bad dreams with something prophetic to say or is he actually a dangerous schizophrenic murderer whose personality split to cope with a troubled past?

A very cheap “quota quickie” style programmer that runs just 66 minutes. I assume this was originally made with the intention of being shown on television; note the frequent fades to black. The acting and character interactions are OK, but the plotline is far too predictable to build much interest and the film takes over 40 minutes to even begin delving into the mystery aspects of the story. From a visual standpoint, it’s an extremely bland and unimaginatively presented film, with neither the director or cinematographer doing much to liven it up. If it’s known for anything today, it’s for containing Lee’s first genre film appearance and as such it barely even qualifies as a horror film. The best performance comes from Longden, who's given horrible billing for a major role. Lee and co-star St. John would also appear together in CORRIDORS OF BLOOD (1958) and the great HORROR HOTEL (1960).

I remember this once actually played on "Chiller Theatre" here in the early '70's! I missed it and they never showed it again. The programmer must have have thought it was horror because of Lee's role then watched it and realized it wasn't a horror film!