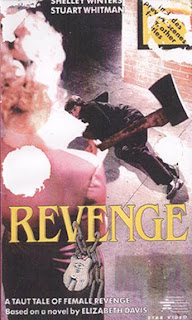 ...aka: There Once Was a Woman
...aka: Vendetta, The
Directed by:
Jud Taylor
At an airport, a mysterious woman swaps computer programmer Frank Klaner’s (Bradford Dillman) briefcase, which is full of important, confidential files. When he returns home that evening to his wife Dianne (Carol Eve Rossen) and young son, Frank receives a phone call from a woman claiming to have it. He hurries off to meet her without telling his wife where he’s going and soon enough finds himself in a MISERY-like situation (only this was made about 20 years earlier). The woman – Amanda Hilton (Shelley Winters, in her first TV movie) – konks Frank out with several blows to the head with a fire poker, drags him downstairs and places him in a specially-made cell with iron bars. An old-fashioned type of nutcase, Amanda seems to hate “immoral” people and profanity, but has no problem serving her captive drugged peanut butter and jelly sandwiches and plotting to kill and dismember him with an axe. Why? Well it has something to do with her dead daughter, who met a man at a conference in Atlantic City, got knocked up and then killed herself after getting the brush off. The man responsible may or may not actually be Frank.

All of the Winters/Dillman scenes are good, but unfortunately the film spends just as much time detailing the wife’s dull search for her missing spouse. Things look more promising when a friend of Dianne’s suggest she go to a demonstration on extra-sensory abilities led by renowned psychic Mark Hembric (Stuart Whitman). Mark seems to know all about Dianne and her situation, but is exposed as being a phony with no actual powers. But that’s OK. In an absurd turn of events, Dianne learns that she actually does have ESP and uses her abilities to find Amanda’s home.

Winters (pretty much going the “Baby Jane” route here) basically plays her role as a jittery, nervous wreck and does unhinged well enough. Scenes where she has to scream, act authorative or raise her voice border on camp. Dillman and everyone else also does fine with what they’re given, too. However, thanks to the psychic storyline and a short run time of just 71 minutes, there aren’t enough scenes between captor and captive to build up a whole lot of suspense and the Amanda character isn’t fleshed out enough to make her all that interesting.
It was based on a novel by Elizabeth Davis. Roger Perry (COUNT YORGA) has small role. Not on DVD, but a video was released through Worldvision.
★★
Posted by The Bloody Pit of Horror at 10:06 PM