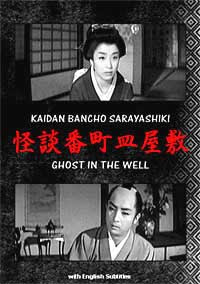 ...aka: Ghost in the Well
...aka: Ghost of the Well
...aka: Ghost Story of Broken Dishes at Bancho Mansion
Directed by:
Juichi Kono
How infatuation with social status spoils love and relationships, a very familiar Japanese theme, serves as the basis for this 45-minute romantic ghost tale from Toei. Hatamoto lord Aoyama Harima (Azuma Chiyonosuke) has been running around with a bad crowd. After a fight with some rivals in the prohibited red light district, leader Lord Mizuno is forced to commit hara-kiri. Harima on the other hand is placed on house arrest but has a chance to redeem himself by marrying a wealthy magistrate’s daughter. The problem is that Harima is already in love with servant girl and “commoner” Kiku (Misora Hibari), whom he’s promised to marry. When faced with the alternative and the complete loss of his status, Harima choses the arranged marriage instead of Kiku. As an exchange for the marriage, Harima offers up his collection of “Korai-yaki;” valuable family plates, to his future father-in-law. While preparing the plates, Kiku accidentally breaks one of them, an offense punishable by death. While arguing with Harima, she breaks another. He kills her and her body falls into a well in the courtyard.

Because of the damaged heirlooms, Harima’s arranged marriage never happens and he’s lost his position and stature in the community. All he’s left with is his love for the dead Kiku, who does at least return to him as a ghost. But it’s not as your typical vengeance-seeking ghost, but one who still loves him and wants to be reunited in the afterlife. She may get her wish when Harima decides to take on about twenty guys from a rival gang all by himself.
Very mild stuff here, though it’s well acted and produced. Aside from a couple of well-choreographed sword fighting scenes and one spooky shot of Kiku rising from her watery grave (plus a couple of other ghost effects); this is strictly melodrama. Dated melodrama, at that. In fact, the mere concept of a subservient ghost girl carrying a torch for the man who slashed her to death over a fucking plate won’t be winning over any feminists. Especially ones who can’t put movies in context to when they were made.
★★
Posted by The Bloody Pit of Horror at 9:04 PM