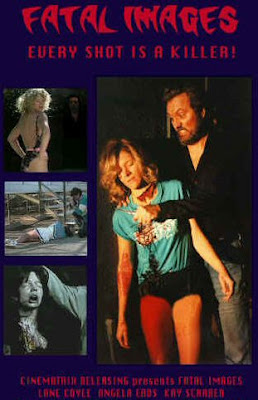 
Kurt Cosgrave (David Williams), a bearded, deep-voiced psycho photographer, kills an undercover policewoman before pointing the camera in his direction and taking a picture. When the police bust in they find Cosgrave dead, but without any explanation as to how he died. Ten years later, professional photographer Amy Stewart (Lane Coyle) goes into a thrift shop looking for props and lets the owner talk her into purchasing a rare camera… the same one previously used (and built) by the psycho from the opening sequence. Amy and her reporter roommate Jennifer (Kay Schaber) both work for a newspaper, but Amy’s a bit annoyed that she’s always getting assignments shooting bitchy swimsuit models and vapid high school cheerleaders and Prom Queens. She decides to whip out her new camera to use during some of her assignments and when the film is later developed, the pictures predict the fates of those photographed, who are stalked and killed off by the dead Cosgrave; a Satanist who managed to transfer his soul into the camera before dying. Cosgrave also plans to possess Amy in an effort to return to the living.

An interesting premise, which seems influenced by both THE OMEN (pictures predicting fates) and WITCHBOARD (a bearded Satanist using an inanimate object to possess a victim and lash out at her friends), but this ultra-cheap shot-on-video effort lacks the energy and talent necessary to make it all work. There’s a surprisingly good performance from lead Coyle, a nice supporting one from Angela Eads as a female police officer and a couple of others who don’t do much damage, but for the most part the actors fail to convince. The writing’s highly uneven, there are consistent continuity problems and the ending is very weak. Even such surefire hilarious moments as a terrible hair band called “Teaser” performing at a saloon don’t seem to help alleviate the boredom much!

Despite the VHS cover, there’s zero nudity and just a pinch of gore. The latter is from Gabriel Bartalos, who’s done some great fx work in the past, but obviously had no budget to work with. As a result he delivers some pretty ho-hum stuff here, including a slashed throat and an arm being ripped off. Bartalos also picked up a credit for 2nd Unit Director. Many of the actors, including Schaber, Eads, Brian Burr Chin (playing a strange guy who knows all about Cosgrave and hassles our heroine about buying the camera) and Jeff Herbick (as a detective personally involved in the case since his girlfriend was a victim) all turned up in Devine’s much-better DEAD GIRLS the following year.

I wouldn’t expect this to be getting a deluxe DVD treatment anytime soon. The VHS is from Active Home Video.

it's unfortunate, as with so many amateur productions, that FRAMES takes too long to do what it does. each scene is needlessly prolonged, dialogue over-explains everything, the overall predictability doesn't help. shame, because _some_ thought went in to this. clever scene-to-scene transitions; call-backs; actual camera coverage. some likeable / credible performers, too -- angela eads as the police officer, brian burr chin, the ex-cult-member & frank scala, expert on all things supernatural. not bad for SOV. if they'd only tightened it up...

goddamn it. i think i called this FATAL FRAMES. oh, for an 'edit' button.

Agree with everything you said about this one. Fatal Frames is another story entirely. It has the budget this one needed but that still doesn't save it from sucking... almost in a good way though because it's hilariously tacky!