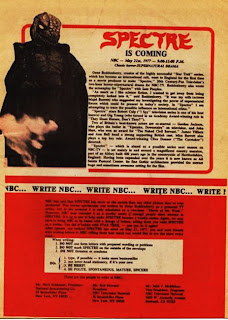 Directed by:
Clive Donner
An American occult investigator (Robert Culp) teams up with a doctor (Gig Young, in his final role) to investigate alleged human sacrifices at a secluded British mansion. A Druid cult turns out to be responsible. Things culminate in a topless occult ceremony featuring a barely-seen (and terrible-looking) lizard monster mostly hidden by a blaze of fire the entire time! Some people like this one and the cast is decent, but I found it silly, dull and ponderous, and understand why it hasn't seen the light of day on video or DVD. Executive producer Gene (Star Trek) Roddenberry also co- wrote the screenplay. The cast includes John Hurt, Ann Bell, Gordon Jackson, James Villiers, Majel Barrett, Jenny Runacre, Vicki Michelle (VIRGIN WITCH) and Penny Irving (HOUSE OF WHIPCORD). It's been ages since I've seen it, so I'll try to give it a rewatch sometime.
★1/2
Posted by The Bloody Pit of Horror at 12:50 AM