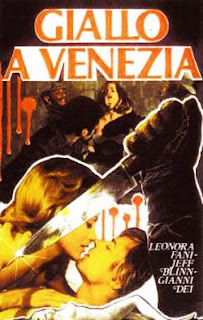 ...aka: Giallo in Venice


Even though GAV is a minor cult favorite and highly sought after title among fans of sleazy Italian horror / exploitation flicks, I'm walking away from this one with pretty mixed emotions. The bodies of Flavia (Leonora Fani), who was drowned and then dragged to shore, and her architect husband Fabio (Gianni Dei), who was stabbed to death with a pair of scissors, are discovered lying along a canal in Venice. Poofy-haired Detective De Paul (Jeff Blynn) is on the case, and tries to piece together clues with help from his Kojak-look assistant Maestrin (Eolo Capritti) and police commissioner Alberto (Giancarlo Del Duca). Meanwhile, sunglasses-wearing psycho Andrea Caron (Michele Renzullo) repeatedly stabs a hooker to death in a most-unmentionable place with - you guessed it! - a pair of scissors, and seems to be stalking his former lover Marzia (Mariangela Giordano), who no longer wants anything to do with him and has found a new hunk of man meat named Marco. But is Andrea also responsible for the murders of Flavia or Fabio? And what part does artist Bruno Nielsen (Vassili "Karamesinis" / Karis), whose artwork happens to feature - you guessed it! - a pair of scissors, play in all this?

The movie gives us a reprieve from the typical murder-mystery format by spending half its time in flashback mode detailing the tumultuous relationship between the original victims. Fabio is a sadist who has a hard time getting off unless he's somehow degrading his naive wife. The degradation comes in many forms. He rapes her, smacks her, makes her have sex in public, allows a random perv to feel her up in movie theater and forces her to give a 17-year-old delivery boy a hand while he secretly watches from behind some blinds. Ahhh, the things we do for love... First you think you've met that special someone and next thing you know they're making you prostitute yourself out to horny sailors who forget to pay you when they're done. These flashback scenes will probably please all the sleaze hounds in the house by offering up gratuitous close-up full-frontal nudity and overlong sex scenes. In fact, the entire first half seems to consist mostly of uncomfortable, awkward sex scenes, as well as a "self-pleasure" scene that seem to go on for an eternity. So if it's 70s era soft-core you want, you'll get plenty of that here.

However, this film pretty much fails at everything else. Though it is classified as a giallo (if by title only), the mystery itself is tepid as can be and the horror elements are basically relegated to just a couple of gory moments. Other than the prostitute murder, a guy is set on fire and there's a scissor stabbing. The most gruesome moment (which actually is well done and effective), features a nude woman being tied to a table and slowly getting her leg sawed off. Other than that, this one seems more concerned with showing skin than anything else. From a technical standpoint, there's not much good to say. The dialogue is terrible, the acting is average, the cinematography is flat and the score sounds like generic elevator music. There's also almost no attempt to capitalize on the picturesque Venetian setting.

I actually preferred director Mario Landi's other horror film - Patrick Lives Again (1980) - to this one. It delivers more on a guilty-pleasure front, with just as much sex, but even more tasteless moments and gore, than this one. Plus it's much easier to find (there's never been an official VHS or DVD release of GAV in America).

You just saved me wasting my money on this one, Cap. Doesn't sound like my 'cup of tea' at all. From the way folks speak of Giallo a Venezia, I'd have expected a violence-and-sleaze filled plot, not awkward Eurotrash softcore.

I have no clue why this is held in high regard by some. There IS a lot of nudity and sleazy scenarios but everything else about it pretty much sucks IMO.